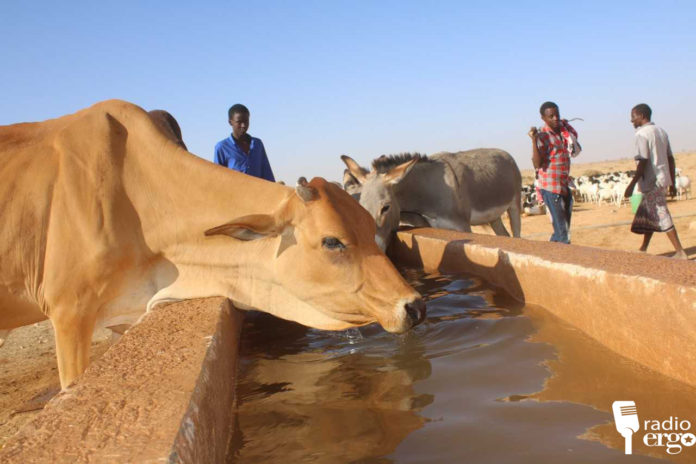 Some 300 pastoralist families living in Kulal village, 200 km away from Lasanod town in the northern Somali region of Sool, are relieved to have their only source of water flowing again, thanks to the quick response of an NGO to a Radio Ergo broadcast.

Radio Ergo’s local reporter Farah Dubad visited the area on 14 February to report on the water crisis facing local people, as the pump at the well had broken down.  Hundreds left the village with their animals – the source of local livelihoods – desperate to find water elsewhere despite the drought in this part of the country.

“I heard on the radio that there was a mechanical problem and the villagers and their livestock were facing a dire situation, so I contacted our Nairobi office for assistance,” said Mohamed.

ARC sent technicians to Kulal, who replaced the old water pump at a cost of $20,000 and got the well working again on 7 March.

Abdullahi Yusuf Abdinur, the manager of the well, said around 150 families had returned in small groups.

“Now we have enough water for both people and livestock. Even water tankers come to fetch water from here.  Just last week dozens of the displaced families came back,” he said.

Ali Jama Mohamud came back from Sufur-Weyne village, 45 km away.  He says he spent over $400 on transport.

“After I was told the well was working again I decided to move the family back to Kulal village to rebuild our livelihood.  I have 250 goats and now I do not have any fear of water shortages,” he said.

Those who stayed in the village when the well was out of order had to buy water at $200 per tanker from commercial sellers, bringing water from Daud-Arale over 100 km away.

Sahardid Hassan Elmi, a pastoralist rearing 230 goats and 17 camels, praised Radio Ergo for raising the problem and ARC for fixing it.

“When the well was broken I had $600 cash to buy water for my livestock and day after day I was losing hope until God sent mechanics who repaired the well,” said Sahardid.

Mohamed noted that ARC depends on Radio Ergo for humanitarian news and this was not the first time they had been able to act on information they heard on the radio.