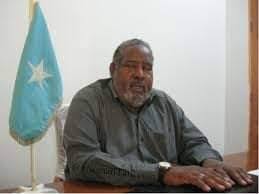 More than thirty years after the carpet bombing of Hargeisa, the shelling of Burao, the strafing of civilians, predominantly women and children, by hired mercenary pilots of the regime of the late dictator, Siyad Barre, up pops an unrepentant, unreconstructed, bloodthirsty felon, Abdirahman “Guulwadde” to declare that it was all , in his words, “justified”

Which begs the question, Can a leopard change it’s spots?. No, it is impossible.

A few months ago, the unelected “president” in Mogadishu, guarded at an considerable expense by AMISON and international forces, whose motto, ironically, is
“nabad iyo nolol” ( peace and life), took a picture with a convicted war criminal, the infamous Col. Tuke, in Washington, DC at the opening of a new Somali “embassy”!

No surprise in that since they are both remnants of that brutal Barre regime. But, the offensiveness of that photo in the eyes of Somalilanders and many other Somalis was and is beyond measure.

Which begs the question, Can a leopard change it’s spots? No, it is impossible.

Nothing will ever change in Mogadishu with regard to Somaliland. They will neither acknowledge nor apologize for the genocide committed against the very people who championed the union and fought for independence against colonialism. So much for “pan-Somalism”.

Somaliland and it’s people have learned their lesson.

Tragically, it came at a heavy price and they will never make the same mistake again. With each diabolical, and truth be told, deeply held, utterance from Mogadishu and it’s cronies, the more determined we are in holding on to our precious sovereignty.

It makes no difference whether few educated and “sane” people from Somalia condemn such offensive remarks and actions; but, let us be clear, these same apologists also deny the fact that Somaliland and Somalia were two sovereign countries who agreed to form the now defunct union. They also deny our history and existence.

Which begs the question, Can a leopard change its spots? No, it is impossible.

It is now over three decades since Somaliland reclaimed it’s sovereignty. We may not enjoy de-jure recognition, YET, but, we enjoy peace, freedom and progress. THERE IS NO GOING BACK.

The only thing left to discuss is the possibility of a future relationship based on good neighbourliness, and of cultural, social and economic ties. If that is not good enough for Mogadishu, then, we all know the next chapter.