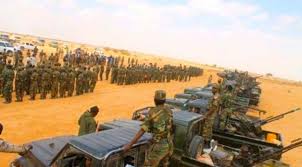 The Deputy Commander of the 10th division of Somaliland national army stationed in Gooje Cade district, Ibrahim Ashkir has been put under arrest.

Locals have told that soldiers under his command were furious over the haste decision to put him behind bars.

Reports coming from Lasanod, Sool’s provincial capital further confirmed that the apprehension of the senior Somaliland army commander was ordered by the commander of the 7th division of SL army, Colonel Mahad Ambashe.

Soldiers loyal to the detained commander were disappointed with decision of putting the commander into custody and threatened to start fighting unless their demands are met and should be released.