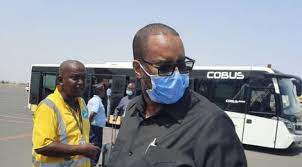 Somalia’s disgraced national security advisor Fahad Yasin on Tuesday made an unexpected return from Turkey to Mogadishu, the capital whilst on board a private plane, a couple of days after Somalia’s PM gave an order to commercial airlines not to bring him home due to alleged mobilization of forces against the administration and compromise in the security of Adden Adde airport. Supporters of outgoing Somalia’s president have hailed his arrival as a great victory and a vital step for progress in the security of the capital, arguing the man had done an excellent job of improving the security before he was fired the PM over his alleged involvement this month of the murder of female intelligence officer. Deputy governor of Benadir region for security, Ali Yare, said: “It was a joyful moment for Fahad Yasin’s return to Mogadishu.” He added that that security around Adden Adde airport was heightened before his plane landed. On last Friday, Turkish flight carrying Yasin was refused to land at Adden Adde airport and was re-routed to Djibouti, where he was arrested by Djibouti authorities. A statement from Somalia’s presidency said that it was a violation of int’l law. However, Djibouti denied the arrest of Fahad Yasin, the former top spy chief who was appointed as security adviser by Somalia after PM fired him. The family of murdered female spy officer lodged a case against the ex-spy chief and his close associates and further asked the military court to issue an arrest warrant for all those who are implicated in the murder