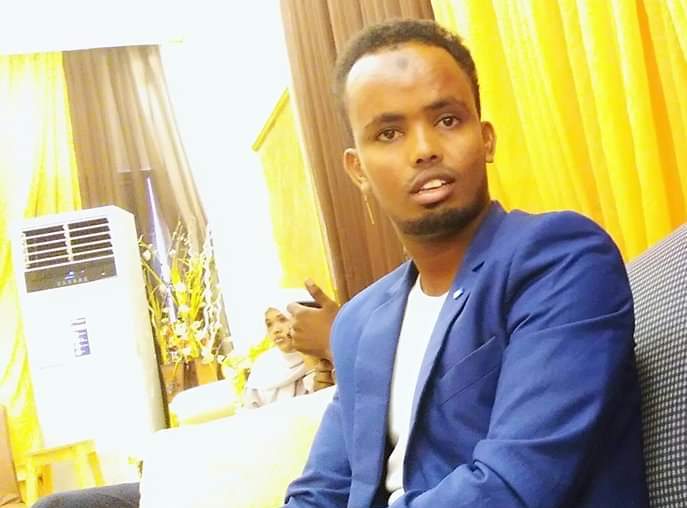 Somali Journalists Syndicate (SJS) calls for an urgent investigation into the acts of beating, punching and kicking journalist Abdulkadir Ahmed Mohamed (alias Mo’alim) who works for Radio Voice of Banadir Regional Administration (BRA) by a security officer in Mogadishu on 26 June 2019.

The journalist was reporting from the 59th Anniversary of 26th June event where top Somali government officials including President Mohamed Abdullahi Farmajo celebrated in commemoration the Independence Day at the BRA Headquarters in Mogadishu when a presidential guards soldier punched, kicked and beat him in a crowded venue inside the BRA compound.

In a video clip shared on social media by several journalists, the uniformed soldier could be seen punching, kicking, beating and knocking the journalist to the floor.

A colleague who was at the event and saw when the soldier beat the journalist told SJS that the officer was angry with the journalists and had previously threatened to beat any journalist he encounters.

“That officer was very annoyed when we were inside the hall as we live streamed the event. He was rude to us and threatened to beat journalists,” said the colleague who asked anonymity due to safety concerns.

Colleagues who came to rescue the journalist tried to intervene by explaining from point blank that he was a journalist but the soldier did not listen.

Journalist Abdulkadir sustained minor bruises and pain at above his kidney and back.

Colleagues and the journalist himself said he could go to work on Wednesday morning and had taken painkillers at home.

The journalist did not file any complaint as of Wednesday evening.

Somali Journalists Syndicate (SJS) condemns the assault against our colleague in the strongest terms possible and called for the federal government authorities to ensure the safety of the journalists who are on reporting missions and bring those held responsible to court.

“We condemn the assault and beating of our colleague in the strongest terms possible” Mohamed Ibrahim (Bakistaan), SJS President said, “We call for the Somali government to investigate this incident properly and bring the officer and officers involved in this attack to book.”

SJS reminds Somali authorities that it is the right of journalists to carry out their work under safe conditions, without fear of being harassed, attacked or beaten specially during when the journalists are on reporting missions involving interactions with state officials and security people.

“Somali journalists are facing more and more violence from state security forces in their day-to-day duties. This is regrettable and should stop,” SJS Secretary General Abdalle Ahmed Mumin said “There is no officer who is above the law. Any officer who commits abuses against journalist should be fully held accountable and prosecuted,”

As of late Wednesday, Director of Communications at the Office of the President, Abdinur Mohamed Ahmed apologized about the assault against journalist Abdulkadir and said that the soldier responsible has been arrested.

On 15 June, 2019, police in Mogadishu assaulted and fired live ammunition at journalists while trying to deny access to a blast site near Sayidka Junction. On May 14, police confiscated journalists’ equipment and detained a cameraman while beating two others during when a group of journalists went to report from a blast site in Warta Nabadda district in Mogadishu.