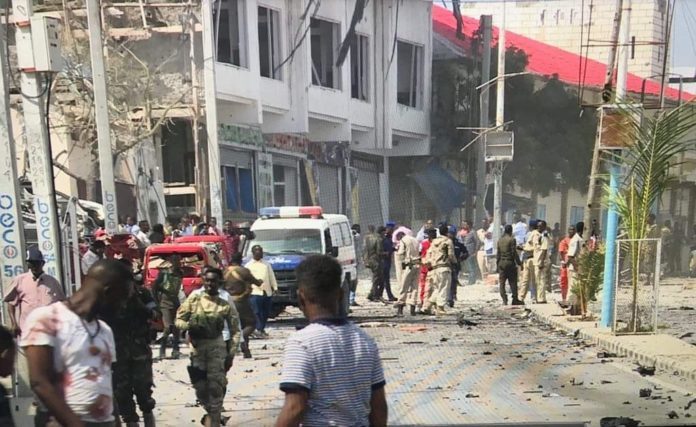 MOGADISHU, Somalia, 15 June, 2019 – Somali Journalists Syndicate (SJS) strongly condemns the police assault, firing live ammunition at journalists and denial of access, after a group of journalists went to report following a car bombing at Sayidka Junction near the Parliament Building in Mogadishu on Saturday 15 June, 2019.

When the journalists tried to explain to the police about their reporting mission, a police officer fired two bullets on air and then pointed his rifle on Jama Nur’s head, according to Jama Nur Ahmed and two other colleagues who spoke to Somali Journalists Syndicate (SJS).

The journalists said the police officers told them they had orders restricting journalist coverage at the scenes of attacks and threatened that any journalist who tries to film will either be shot dead or his/her equipment will be broken resulting the journalists to return back from the scene.

“Police informed us that they have orders to deny journalists from accessing the scene and shoot any journalist who films or takes photos during bombings,” Jama Nur Ahmed of Al-Jazeera told SJS “Even, a member of the police fired live bullets at us endangering our lives. Thanks God no journalist was hurt.”

“The police are treating the journalists as criminals. This is not the first time we encounter such a problem. Whenever we go to report places of explosions the police block our access,” Feisal Omar of Reuters told SJS “We cannot report freely.”

Minutes later, a group of other journalists including European Pressphoto Agency (EPA) photographer, Said Yusuf Warsame and Reuters Videographer, Abdirahman Hussein among others were denied access as they tried to reach the blast site.

“Police pointed their guns at us as we approached the Sayidka Junction. We left the place without doing any job,” Said Yusuf Warsame of EPA told SJS.

Somali Journalsits Syndicate (SJS) calls the Ministry of Information, Police Commissioner and the Office of the Prime Minister to open a proper investigation into today’s act of shooting and violence against the journalists and take appropriate steps against those responsible.

SJS condemns the police brutality and obstruction of journalists’ access to information including reaching and reporting from places of important newsy incidents which is a basic constitutional right.

“This is a symptom of a worsening situation against journalists in Somalia where impunity has been prevalent. We call the highest offices of the government including that of the Office of the Prime Minister to intervene in order for the journalists to report freely and accurately without fear,” Somali Journalists Syndicate (SJS) said.

On May 14, police confiscated journalists’ equipment and detained a cameraman while beating up two others during when a group of journalists went to report from a blast site in Warta Nabadda district in Mogadishu.