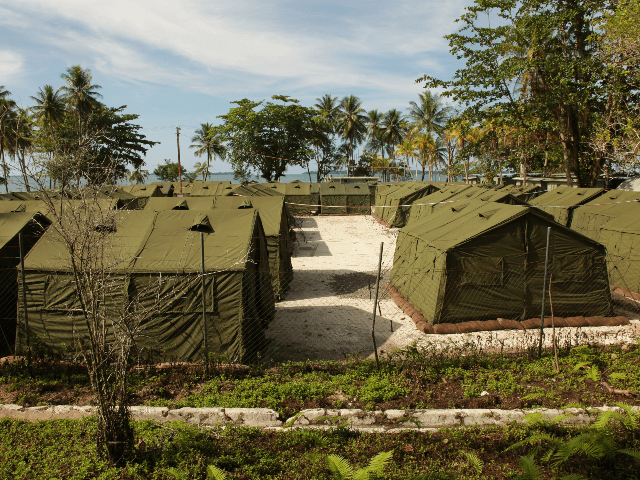 A “highly depressed” Somali asylum seeker set himself on fire on Manus Island in Papua New Guinea on Monday.

The 30-year-old man, held at the East Lorengau Refugee Transit Center run by the Australian government, set himself alight while in the camp on Monday, local media reported. The blaze was quickly extinguished and he was taken to a nearby hospital for treatment for burns before being discharged.

One image posted to social media by an alleged fellow asylum seeker going by “Benham Satah” shows the man, described as “highly depressed,” with severe burns to his upper body, lying on the floor covered in white fire-fighting chemical powder.

“It’s truly hard to explain it but I am sure it’s more contagious than salmonella or typhoid,” Satah told the Associated Press of the rise in mental illness among refugees. “Many are thinking about death every second. Even religious people are ignoring God nowadays.”

“We have no hope or reason to go through another day,” he continued. “Everyone is mentally unwell. We have been treated worse than criminals while we didn’t commit any (crimes).”

Despite the closure of the main Manus Regional Processing Centre in 2017, many migrants are still on the island in detention facilities, hoping that they will eventually be granted the right to reside in Australia. Their hope was largely based on the potential of a left-wing government taking control in Australia and loosening migration requirements. Instead, in the most recent election, Australia’s right-leaning Liberal Party was re-elected as majority for another five-year term.

“We’ve been upfront with Australia, we’re reducing the cap on our migration intake and capping the numbers of people we let in under our humanitarian program that’s one of the most generous in the world,” Morrison said in April. “We’re telling people where we’ll be taking migrants from, who they will be, the skills we want them to have and working with regions to settle people in towns that want and need more workers, skills, and students.”

Australia has established several detainee facilities for migrants scattered across Oceania. Papua New Guinea, Nauru, and Christmas Island have all hosted facilities. Those held there typically attempted to enter Australia illegally by sea and were intercepted by maritime Australian authorities.

The rise in self-harm and suicide attempts has prompted condemnation from the Refugee Action Coalition, which recently accused the Australian government of persecuting those still held on the island.

“The situation on Manus continues to spiral downwards,” said Ian Rintoul, spokesperson for the Refugee Action Coalition, “Yet the government has no resettlement plan for those illegally held on Manus for almost six years.”

“The Australian government continues to persecute people that have been found to be owed international protection,” he continued. “Only 40 people have been transferred from Manus and Nauru for medical treatment since the Medevac Bill became law in February. There is an urgent need for the medical transfer of all those who are at risk on Manus and Nauru.”