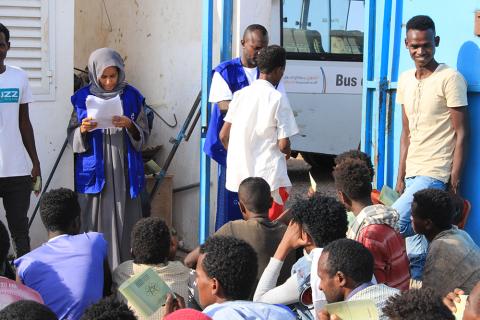 Djibouti – A January shipwreck that took the lives of dozens of migrants from the Horn of Africa may pose a turning point in the deadly passage of Africans to the Arabian Peninsula. Officials of the International Organization for Migration report that since the 29 January tragedy near Godoria in the Obock region, north-east of Djibouti more migrants have been approaching IOM for assistance with voluntary return to home countries.

The final death toll of the boat accident was 52 and included three women. Most of the deceased were from neighboring Ethiopia. The 16 survivors – all Ethiopian – were attended by IOM at its Migrant Response Centre (MRC) in Obock.  The centre, one of several operated by IOM in the East and Horn of Africa, provides food, water, primary health care, psychosocial counselling and information – along with the offer of assistance in returning home.

Djibouti attracts large numbers of Ethiopian youth intending to cross the Gulf of Aden to Yemen, with many aspiring to eventually reach Saudi Arabia. But until they can negotiate a ride on any of the available fishing boats or others arranged by agents, they linger by Obock, having already been weakened by the grueling journey through one of the continent’s driest places, to reach the coast.

Last month’s shipwreck was not a rarity for the region. Data from IOM Berlin’s Missing Migrants Project (MMP) show that there have been at least 199 drownings confirmed off the coast of Obock since 2014.

A programme called the EU-IOM Joint Initiative for Migrant Protection and Reintegration in the Horn of Africa is assisting these migrants as they come forward for help returning to their homelands – mainly to Ethiopia. That programme is designed to enable orderly, safe, regular and responsible migration management through the facilitation of dignified voluntary return and the implementation of development-focused and sustainable reintegration policies and processes.

Backed by the EU Trust Fund, the Joint Initiative cooperates with a total of 26 African countries.

“Including the 16 survivors of the Godoria shipwreck, this month (February) IOM assisted 1,327 migrants for voluntary return to their home countries,” explained IOM Djibouti Chief of Mission Lalini Veerassamy. That’s close to one third of the total number assisted by IOM in Djibouti in 2018 – 3,382 migrants, Veerassamy explained.

Among those at the Obock was Bayan Mohamed Youssouf, a 20-year-old Ethiopian migrant, who will be going home soon through the IOM’s assisted voluntary return support. When asked why he now wanted to go back to Ethiopia, he said: “I paid 13,000 Ethiopian Birrs (about USD 450) to a smuggler to go to Yemen. I was on the beach when the others got into the boat that capsized. My trip was cancelled because the sea was too rough. I do not want to travel anymore. There were a lot of deaths. I prefer to go home.”

Bayan’s testimony illustrates the psychological impact that this shipwreck has had on some migrants, although many others still cross Djibouti daily headed for the Arabian Peninsula in search of a better life.