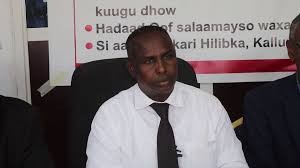 The Ministry of Health has warned against public hospitals from charging fees on morgue fridges facility services across the nation. This was announced by the Director General of the health ministry, Dr. Mohamed Abdi Hergeye while speaking to local media. The DG has instructed that from now on that public hospital and medical centers under the patronage of the government are prohibited from charging fees for hospital freezers. Dr. Hergeye stated that he did not know if the hospital used to charge but instructed that if they used to do that it was quite wrong. Her further disclosed that the morgue freezers will be free of charge and the running costs be it electricity will be under the country responsibility. The ministry’s instruction comes barely two weeks after family of Mukhtar M Elabe from Gebiley region, was horrified after his body was left to decompose on the dusty grounds of Burao Hospital for 48 hours. The incident occurred on the 26th April, 2020. The family was asked to pay $ 200 to keep his remains in the hospital morgue in order to investigate the cause of his death and police to carry out autopsy. The family alleged that his corpse was left to decay after hospital staff removed the corpse from the freezer and replaced it with another dead body.