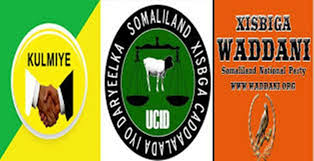 The political parties held an emergency meeting yesterday after they met and held talks with EU high powered delegation a day before.

The EU informed Somaliland government and the political parties to either resolve the bone of contention or the funds for the election will not be released.

The three political parties met in order to settle the protracted election dispute and held the meeting at Justice and Welfare party headquarters.

They had debate and decided that they should come up a final resolution to the squabble.

Once the meeting ended which saw the attendance of UCID, Kulmiye, and Wadani political parties, they refused to brief the media on the issues raised during the talks.

Reports confirm that the three political parties made a major breakthrough over the election deadlock.

They made a comprise were every party changed its stance which will pave the way for smooth polls to transpire in Somaliland.

It is expected that the parties will announce that they have come to common terms within the day to come.