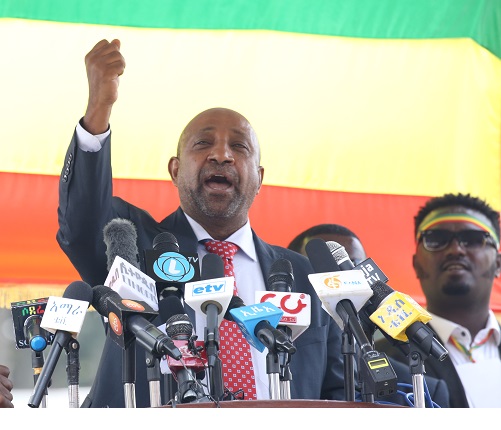 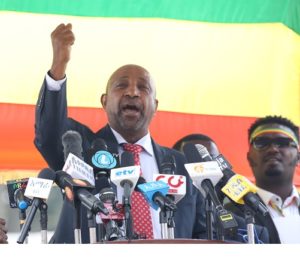 The popular leader of a formerly outlawed opposition group returned to Ethiopia on Sunday where he was greeted by a crowd of thousands after 11 years in exile, an AFP reporter witnessed.

Berhanu Nega, the leader of the former armed movement Ginbot 7, returned with scores of other senior members of the group, after reformist Prime Minister Abiy Ahmed removed the group from a list of “terrorist” organisations in July.

Speaking at a ceremony in the capital Addis Ababa, Berhanu said he had been forced to wage an armed struggle to fight for Ethiopians’ rights, however, recent political changes had convinced him to return to the country and conduct a peaceful campaign.

Since taking office in April, Abiy has released imprisoned dissidents and prioritised reconciling with the country’s various opposition groups in a country long under the iron-fisted rule of the Ethiopian People’s Revolutionary Democratic Front (EPRDF) coalition.

One of Ginbot 7’s supporters, Sileshi Bekele, told AFP he believed Berhanu was capable of transforming Ethiopian politics due to his support from the youth.

“There is a young population which wants to see change, this youth has come out in mass to see the change, I as part of this group have come out to support the change, he said.

Ethiopians wave national flags and celebrate in the streets of Addis Ababa the return of Berhanu Nega, the leader of the former armed movement Ginbot 7, after 11 years in exile. (AFP)

Ginbot 7 had been accused by authorities of armed banditry and small-scale terrorist plots.

Berhanu was elected mayor of Addis Ababa in a contentious May 2005 election, however was imprisoned before assuming office and accused of leading a civil insurrection with intent to overthrow the ruling party after accusing the EPRDF of trying to rig the results.

His party called for street action that was violently suppressed by security forces, leading to the death of around 200 people.

In the aftermath of the bloody protests Berhanu and other opposition leaders were jailed for 20 months before being released as part of a pardon agreement in July 2007.

Ever since then the party has been based in neighbouring Eritrea – former arch-foe of Ethiopia.

Ethiopian leader of the former armed movement Ginbot 7 Berhanu Nega (L) is greeted by a supporter upon his arrival at a meeting at the National Stadium in Addis Ababa, to celebrate his return after 11 years in exile. (AFP)

As part of his reforms, Abiy has been credited with the lightning peace process between the two nations, who signed a peace pact in July, and have since re-opened embassies, trade routes and air links.

The flurry of diplomacy in the Horn of Africa has also seen Somalia establish diplomatic links with Eritrea, while Eritrea this week made moves to end a long spat with neighbouring Djibouti.

In August Abiy promised that the next election in Ethiopia in 2020 would be “free and fair” and promised a democratic transition if his party loses.