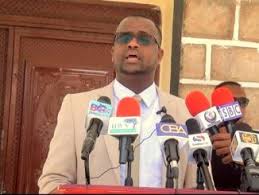 In a press conference, UCID party secretary of information and Wadani official alleged that two SL nationals are illegally held in Mogadishu.

The two opposition officials said the detained men were businessmen that work in Mogadishu and identified as Ahmed Awale and Khadar Hadhigle.

Khadar Keyse and Mohamed Farah alleged that chief of police in Banadir region is holding the men in captivity illegally.

Mohamed Farah has said that the two were subjected to discrimination in Mogadishu because they were from Somaliland.

He said that is unacceptable and a despicable act.

Khadar Keyse, the press secretary for Justice and Welfare party, called on the Federal Gov’t of Somalia to immediately release the detained men and lift the ban on their businesses.

He alleged that all Somalis from all over the region trade and do business together everywhere.