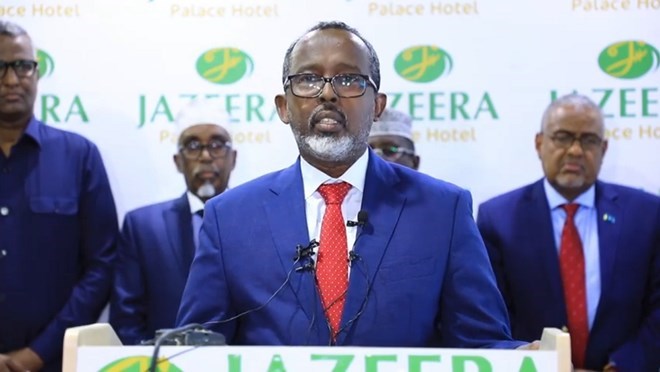 Somalia’s opposition intends to set up a National Salvation Government that will be tasked to oversee the elections scheduled to be held in two years time after it boycotted ongoing parliamentary elections.

The opposition described the process as fraudulent, and could trigger skirmishes with president’s supporters similar to those that occurred in Mogadishu in April.

A statement issued by the opposition on Sunday said it would hold a National Consultative Conference that is intended to host intellectuals across social, political and economic sects to further efforts aimed at saving the country from sliding back to another civil war.

The Council of Presidential Candidates wants to establish ” High Council of the States”, which will consist of 50 members and whose task is to pick a president who will then name a prime minister to lead the country elections.

Reports show that the opposition members, including former president Sharif Sheikh Ahmed-who is the chair of the Council of Presidential Candidates- are bitterly opposed against the proposal. He is suspected of having friendly relations with the current president Mohamed Abdullahi Farmajo and his main ally Fahad Yasin.

The parallel government’s top priority would be liberation of the country, completion of the national consultation and holding of a referendum for its endorsement and the conduct of one person one vote.

Abdirisak Omar Mohamed, an opposition said: ” Work is now in full progress, should the PM fails to suspend its fraudulent electoral process, his failure will not only act as a catalyst to the formation of the council but will force the CPC to act immediately in days to expedite the process of establishing NGS