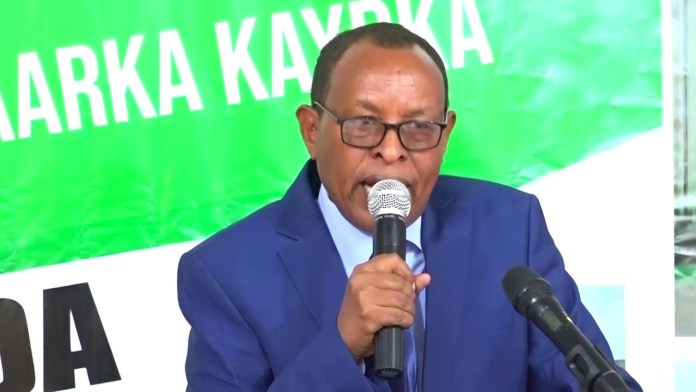 The National Disaster Agency and Food Reserves (NADFOR) have confirmed that there is widespread drought in the country.

The head of the agency Mr. Faisal Ali Sheikh made the confirmation as he gave an exclusive interview to SOLNA director Omar Mohamed Farah and his colleague Yusuf yesterday Sunday 6th March.

The NADFOR chief noted that severe drought has hit vast areas of Marodi-jeeh, most parts of Togdher, Sool and Sanaag regions.

Mr. Faisal averred that it was high time concerted efforts were made either individually, through local or international NGO’s, the State, etc. to pull together resources hence mobilize relief aid.

He gave a re-cup of how his agency has so far tried to distribute basic necessary foodstuff to hundreds of families throughout many parts of the areas noted above.

This is far short from the 55,000 number of families that he said were directly affected, to date, suffering the plight of famine especially given that they were pastoralist livestock farmers.

He said that Togdheer region has had its southern and eastern parts affected, Sanaag has Garadag, Elafweyn and Fiqifuliye hit.

The NADFOR chairman pointed out that they so have far distributed to 400 families in Garadag basic necessities at average of 60 to 70 families in Faraguul, Sin’aro, Shisha, Daradweyne, Tuur A and Tuur B locations.

Similarly, the agency have supplied to the outposts of Haji Saleh, Duruqsi, and Balidiig necessities for 150 families per center.

Mr. Faisal said that on top of it all, they have managed to make supplies to hospitals and jails across parts of the country and that the handicapped and the most needy that have been identified were given priorities.

He added that associations like SOYAAL has helped them point out the most deserving. Most important is the fact that in his official capacity he declared the need of immediate concerted efforts geared towards to this goal.