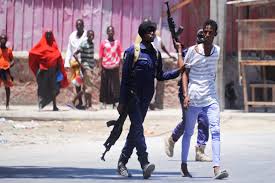 On 30 March, during a meeting with the local journalists in Hargeisa, Somaliland’s Vice President, Abdirahman Abdullahi Seylici described any journalist who reports any Coronavirus case before the government confirmation “as a national criminal” in a bid to censor independent media coverage following reports of the first case of the pandemic in Somaliland.

On 19 March, police officers in Mogadishu’s Bondhere district briefly detained and harassed Somali Cable TV reporter, Abdullahi Farah Nur (aka Yariisow) and slapped his cameraman Abdirahman Omar on the face, while both were collecting vox-pops on the shortage of masks and gloves in the local markets due to the panic of Covid-19 pandemic.  According to Yariisow, the officers held them at the Daljirka area before taking to an open place near the Bondhere police station.  “I repeatedly asked for an explanation but the officers who showed us their pistols said we were wrong to film Daljirka area, where we were conducting our interviews,” Journalist Yariisow told SJS.

The pair was released without any charge.

On 27 March, the Mogadishu-based Anadolu News Agency reporter, Mohamed Dhaysane came under pressure after reporting Somali Government’s announcement to send over 20 doctors to help fight coronavirus in Italy, the country where the virus has claimed the most lives. According to the journalist, two state officials asked him to retract the news report after the government met a backlash from the public including families who expressed concern over the health safety of the Somali doctors.

On 12 March, a Somali Ministry of Health official had asked Universal TV to remove an online article that followed an interview with the Minister of Health, Dr Fawsiya Abikar about putting four individuals in quarantine for suspected Coronavirus cases.  Both the article and the interview remained online after the editors declined the official’s demand.

“We condemn the latest attacks against reporters covering COVD-19 in Mogadishu and Hargeisa,” Abdalle Ahmed Mumin, Secretary General of the Somali Journalists Syndicate (SJS) said, “Authorities should realize that this is a public interest matter and the journalists have the right to feed information they have on the pandemic to the public.”

“We call for the authorities in Mogadishu and Hargeisa to allow free flow of information and permit journalists and media stations adequate access to cover the news related to the pandemic to save lives,” Mr. Mumin added.