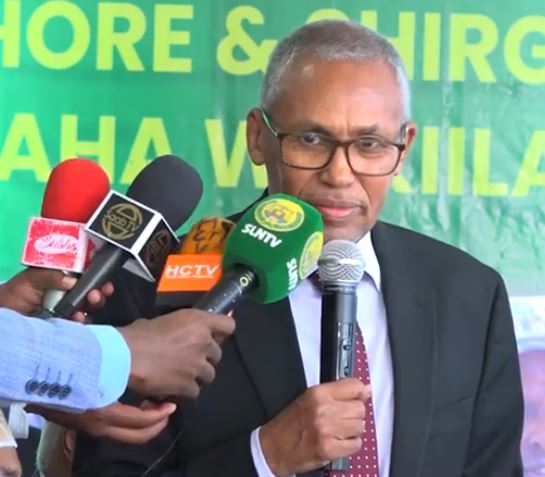 The Minister of Finance Dr. Sa’ad Ali Shire has underlined that the first duty of the House of Representatives is the protection of the peace and sovereignty of Somaliland, and he hopes that they will fulfill their responsibilities.
Speaking the ceremony new Speaker takes over the helm of the House of Representatives, Dr. Sa’ad said that two rare elections have taken place in Somaliland.
“Election of the parliament and new speaker of the house of representative, Somaliland have shown a victory rarely happen over developing countries, they have gone down in history.
Dr Sa’ad congratulated the new lawmakers and their new chair and wished them well in their new role.
“The new Lawmakers has made two promises, one to the people who voted them and, second on Allah upon swearing, We pray to God to make it easier for them to fulfill.
The Minister of Finance, Dr. Saad, thanked the previous House of Representatives and their chair, where they shared close working relationship in accordance with the law.
“I hope we will work closely with the new chair and lawmakers as the government and parliament both are people’s servants, and awaited to fulfill their responsibilities, may God make it easy for us.
Dr. Sa’ad said that the constitution of Somaliland mentions the responsibility of the House of Representatives, where the first of which is to promote peace and the preservation of Somaliland’s sovereignty, and called on them to fulfill their role.