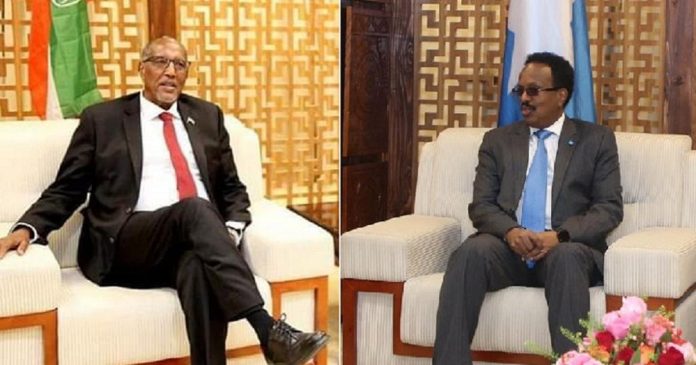 In what could spell better times for the horn of Africa nemesis Somalia and Somaliland, the presidents of the two erstwhile united nations met in the Ethiopian capital Addis Ababa for the first time.

The two leaders met at the Ethiopian Prime Minister’s office on Tuesday.

While it is not clear what the two discussed, their meeting could unlock the impasse that has existed between the two countries for close to three decades when Somaliland declared its own independence from Somalia on May 18, 1991, after the start of the civil war.

Somaliland has since then been pushing for international recognition but Somalia has ensured this does not happen to claim the former remains part of its regions.

The meeting between the two presidents comes at a time when the international community has been pushing for the restart of talks between the two countries after initial talks initiated by Turkey collapsed.

Last year, a scheduled meeting between the two in Addis failed to materialize.

Farmajoo has been in Addis Ababa for the 33rd African Union Summit while Somaliland President Muse Bihi Abdi attended the summit as part of his continued mission to push for Somaliland recognition by the African Union.

In 2018, Somalia and Somaliland engaged in a war of words following the signing of an agreement to manage the latter’s Berbera port.

Under the tripartite agreement signed in March, Ethiopia acquired a 19% stake in the port, joining Somaliland and DP World of the United Arab Emirates (UAE) under a 30-year concession.

DP World is rebuilding the Port of Berbera touted to emerge as the busiest in the horn once it’s completed.

Somalia declared the agreement ‘null and void’ saying Somaliland had no authority to enter into international agreements, to which Somaliland responded by saying Somalia had ‘declared war’.

The last round of talks between the two sides in March 2015 in Turkey collapsed and any attempts to revive them have not been successful. Somaliland cancelled its participation similar talks in March 2018 following a fall-out Somalia over the Berbera port row.

President Farmajo has previously said his government is still ready to resume the talks with Somaliland but the latter gave tough conditions for future dialogue.

Top in Somaliland demands was that Mogadishu admits that Somaliland was an independent country and that international intergovernmental organizations and institutions use the name, map, emblem and flag of Somaliland in their project documents.

At the council of the ministers of Somaliland chaired by the President, Musa Bihi, Somaliland decided that it is ready for continuing dialogue, which should be held in a neutral venue with a clear agenda touching on future relations, and the international community should serve as mediators.

“Somalia should not be represented in the dialogue by individuals and politicians hailing from Somaliland who are holding positions in Somalia or who are against the statehood and existence of the Republic of Somaliland,” Somaliland council of ministers said in a statement.

Bashe Omar, the Somaliland envoy to Kenya is optimistic the meeting between the two leaders in Addis will be the start of a new process that will ultimately see the two countries working together.

“This is what we have been praying for. We hope this will give the international community an opportunity to join in and unlock the issues that have created a buffer previously,” he said.

“We anticipate full political recognition at all costs. The possibilities for fruitful results are high only that Somalia’s previous miscalculations have proved difficult for the talks to go ahead. Now we are seeing some glimmer of hope after the Addis meeting,” added Bashe Omar.

Last month, The UN Special Representative of the Secretary-General for Somalia, Ambassador James Swan visited Somaliland’s capital Hargeisa with a special message to the country’s President Muse Bihi on its (UN) support towards initiatives aimed at building mutual confidence and fostering dialogue between Hargeisa and Mogadishu.