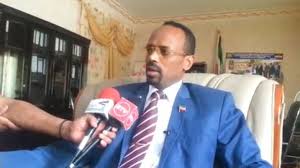 Ahmed Muse, who is the brother of the jailed ex-minister, has confirmed that Shuaib had not eaten for the past three days.

He also disclosed that relatives were denied to get a visit to his incarcerated brother at Hargeisa central police station.

Ahmed also revealed that his brother is ill as he is suffering from chronic diabetes.

Mr. Shuaib, is currently a candidate for the upcoming parliamentary elections as he is a member of Justice & Welfare party.

He was arrested on March 25, over allegations of forged high school certification.

He will appear in the court on Saturday as his case will be heard.

Ahmed has blamed the arrest of his brother for the current telecommunication minister in conjunction with the lawmaker by the name of Abdilahi Balaki.

Shuaib served as the deputy minister of public works & housing during Riyale’s administration.

He also became the mayor of Gebiley in the current local council in Gebiley.

He served as the minister of industry during Silanyo’s administration.