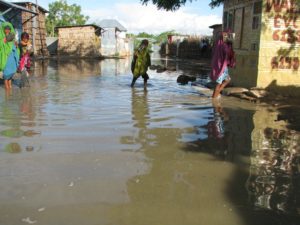 The rising level of the River Shabelle is causing high anxiety among people living along the river in the southern Somalia town of Beletweyne, where flooding earlier this year caused major destruction and displacement.

Nurto Hassan Ahmed, a mother of six living in Hawo Tako on the outskirts of town, told Radio Ergo she had packed up her belongings ready to get out of the house quickly if the river starts to overflow its banks.

In April, she had to move suddenly with her children when the rising river took them all unawares.

“I nearly lost my children in the previous floods,” said Nurto, recalling the nightmare. “The water came in to the house at night while we were sleeping.”

People living in the densely populated areas of Hawo Tako, Hawl wadaag, Kooshin, and Buundoweyn, who all suffered in April, are very likely to suffer another disaster, according to experts.

Professor Muse Sha’iye, an advisor to Somalia Water and Land Information Management (SWALIM), told Radio Ergo that the erosion of the rivers banks in these areas in Beletweyne pose a serious risk of flooding in the surrounding villages.

Recent heavy rainfall in the Ethiopian highlands has brought large flows of water down river. Excessive amounts of silt and sediment have piled up along the river bed, reducing the amount of water the river can hold and exacerbating the risk of further flooding.

Professor Sha’iye identifed 124 weak spots along the river banks that may break if there is water levels rise further. Fifty places along the river in Hiraan and Middle Shebelle regions were broken during the last flooding.

For Nuurto and other householders like her, meanwhile, there is nothing they can do but keep a wary eye on the river day and night.  That is what she is doing, as well as her neighbours. There is no other more formal system to alert them to the need to move.

Thousands of people were left homeless after the floods in April, and large tracts of farmland were inundated with crops washed away.  Most of the displaced began returning to their homes to try to rebuild in July.

The social welfare representative in Hiran region, Hussein Osman Ali, told Radio Ergo that the local authority does not have the resources to work on reconstructing the broken river banks.