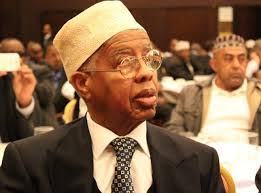 Former Somali Prime Minister, Nur Hassan Hussein,’Nur Adde’ has passed away in London on Wednesday after contracting the COVID-19, his family confirmed.

According to the Mohamed Nur Adde, he said that his father died in King’s College where he was receiving mediation over the COVID-19.

His family said that his body will be laid to rest in London.

He also served as the president of Somali Red Crescent for many years.