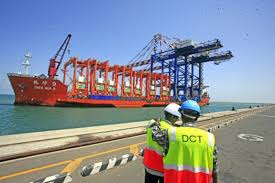 Last week, Djibouti upped the stakes in its long-running dispute with DP World, Dubai’s state-owned ports authority, as the tiny east African country bids to pry one of its key shipping hubs out of Emirati hands.

At first glance, this might seem like nothing more than an emerging, ambitious state attempting to free itself from a constrictive contract. Yet in fact, the spat has major geopolitical implications, particularly for the United States. By bloodying the nose of DP World, Djibouti risks upsetting the balance of power in one of the world’s most politically sensitive regions and giving a major boost to China, at a time when the frostiness between Washington and Beijing is fueling talk of a new cold war.

Djibouti has been trying to get rid of DP World since February, when it terminated the company’s joint venture contract on its Doraleh Container Terminal and seized control. DP World has since secured an injunction from a UK tribunal ruling the seizure illegal, and won a separate verdict from London’s High Court preventing Doraleh’s majority shareholder, Port de Djibouti SA, from ejecting it. Yet now the Djibouti government has responded by nationalizing PDSA, effectively taking Doraleh out of commercial hands.

Officials briefing on behalf of Djibouti’s president, Ismail Omar Guelleh, say the government is simply trying to protect “national sovereignty and economic independence.” The battle with DP World is certainly consistent with Guelleh’s aggressive economic policy, which seeks to exploit Djibouti’s position as a gateway to the Red Sea and Suez Canal. Almost all maritime trade between Europe and Asia, worth some $700 billion per year, brushes the country on its way through, and Guelleh’s administration wants to turn Djibouti into a regional trading hub – not dissimilar, in fact, to Dubai. He’s launched a frenzy of development projects, opening threenew ports in the past year alone – and he’s planted a huge new free trade hub on the disputed Doraleh terminal, expected to be the largest such facility in Africa.

But behind the Djiboutian government’s bombastic rhetoric, it’s clear to see the influence of a hidden hand – and it extends from Beijing. China is building a global trade network through its $1 trillion ‘Belt and Road’ investment program and sees Djibouti as a key piece of the jigsaw, a conduit to Africa and specifically to Ethiopia, one of its key investment destinations. Chinese banks have lent Djibouti over $1.4 billion in the last two years, more than 75% of its GDP, and financed a number of those infrastructure projects, notably the railway to Addis Ababa. Crucially, the new free trade zone at Doraleh has been built with Chinese money and manpower, and it will be operated in a joint venture with the state-owned China Merchants Holdings.

Unsurprisingly, this has infuriated DP World, which has threatened China with legal action over what it sees as an attempt to cut it out of the Doraleh deal. But the opprobrium isn’t solely confined to Dubai; concern is also being felt in Washington, where lawmakers have discussed in worried terms the possibility that Guelleh will give the entire Doraleh port to China as a gift. Were this simply a commercial matter, it probably wouldn’t warrant a Congressional hearing. But it’s far more than just a commercial matter: China has already built a military base at Doraleh, next door to the container terminal, and this spells trouble for the U.S., whose own military installation, the massive Camp Lemonnier, is just a short walk away.

China, of course, insists Belt and Road is simply about building a 21st century trade network, and President Xi Jinping assures us he will treat Djibouti as an equal partner. But to the critics, China’s expansion in Djibouti is straight from an extremely cynical playbook, one in which Beijing lures its poorer ‘partner’ into a debt trap with cheap loans before snapping it shut to snare a strategically vital asset. This gift-wrapped clientelism has already yielded a number of key foreign facilities, notably the port of Hambantota in the Indian Ocean, which was greedily gobbled up by China Merchants on a 99-year-lease after the Sri Lankan government buckled under its repayment plan.

With Djibouti’s debt-to-GDP ratio already up to 85%, thanks largely to the Chinese loans, it’s easy to see why critics believe Doraleh will go the same way. And if this were to happen, it could be disastrous for the US, which has already hit out at China for pointing military-grade lasers at its fighter pilots over Djibouti. American military leaders fear that, if China had full control of Doraleh, it could prevent American ships from refueling there, effectively imposing a chokehold on Camp Lemonnier.

As Donald Trump bids to bring China to heel with a fresh round of sanctions, this threat is particularly unwelcome, and could serve to undermine Washington’s leverage in its deepening stand-off with Beijing. What’s more, it comes at a time when the Somali government is threatening to fall apart and the Yemeni civil war, a proxy power struggle between Saudi Arabia and America’s Iranian nemesis, continues to rage. Camp Lemonnier serves as a jump-off point to both Somalia and Yemen; the US needs full and unimpeded access to Camp Lemonnier, now more than ever.

Guelleh and his colleagues might claim China’s growing involvement poses no threat to the U.S., but that olive branch is unlikely to convince its intended recipient. After years of encouraging foreign powers to set up camp in the country, Djibouti has created a potential powder keg, and now holds the match in its hand. Some might suggest Djibouti is too small, too insignificant, to spark a confrontation between the US and its eastern foe. But then, they probably said the same about the Bay of Pigs.