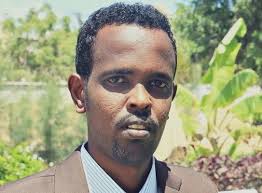 MOGADISHU—Goobjoog news reporter, Abdiasis Ahmed Gurbiye has been released on bail on Saturday after he spent five days behind bars in Mogadishu, Somalia’s capital. Villa Somalia has today distanced itself that the journalist was not detained on the orders of President Farmajo.

Mr. Gurbiye is the Deputy Director of Goobjoog Media Group and was detained on 14th April, a day after he wrote on his facebook account that President Farmajo stole a ventilator donated to Martini Hospital which is handling the treatment of Covid-19 patients in Mogadishu. Villa Somalia already denied reports that the journalist was put behind bars by the office of Somalia’s presidency and there was a skepticism that attorney general lodged the lawsuit against the reporter.

On the other hand, Mohamed Abdiwahab Abujaa, who is among the practicing journalists based in the capital Mogadishu is also behind bars and spent 31 days in captivity. Reports indicate that the reporter Abujaa is detained by the government of Somalia. He is believed to have been arrested after airing a new commentary on looting committed by security forces in Mogadishu against local residents. Details on the detention of the journalist Abujaa is sketchy. The Somali Federal Gov’t is accused of arresting reporters in Mogadishu without taking the legal procedures which is an infringement of freedom of speech.