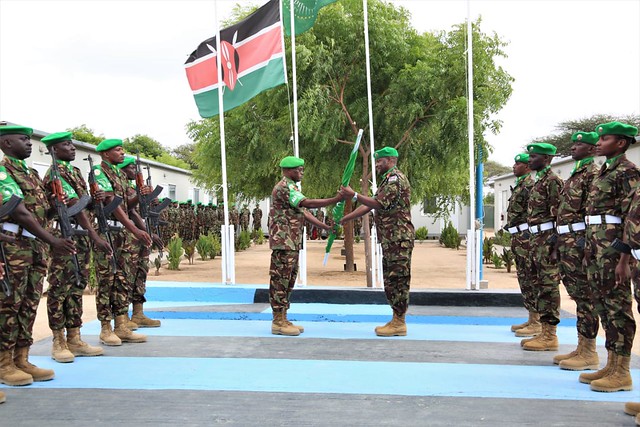 A ceremony to mark the command handover took place at the AMISOM Sector II Headquarters in Dhobley, which is under the responsibility of the Kenyan Defence Forces (KDF).

During the ceremony, Brig. Rutto and Brig. Njema expressed confidence in the pursuit of peace and stability in Somalia.

The outgoing commander, Brig. Rutto thanked his officers, men, and women for their teamwork, which ensured operational success and timely decision making.

Brig. Rutto noted that his contingent had initiated several Civil-Military Cooperation (CIMIC) projects and urged the incoming contingent to complete the projects for the benefit of both the local communities and the troops.

“We have cleared roads, sunk boreholes, and provided medical support to our dear Somali brothers and sisters. We know this can only be improved,” he noted.

He also noted that AMISOM KDF troops had successfully degraded the terrorists in the area and called for further degradation of the enemy’s activities to secure Somalia and Kenya.

Brig. Njema saluted his predecessor for the great job and pledged to build on the achievements of the outgoing contingent. “We shall not stop until the AMISOM mandate of achieving peace is achieved,” said Brig. Njema.