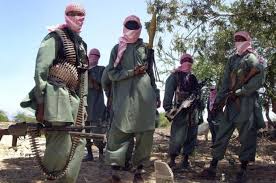 The execution was carried out in Jamame district where court judge read the names of the individuals convicted on charges involving espionage, and said that they all admitted to the crime.

The six men were executed by an Al shabab firing squad. The execution took place at public place where the group conducts such operations. Two days ago, the group displayed bodies of several US-trained Somali troops killed in an attack near Kismayo.