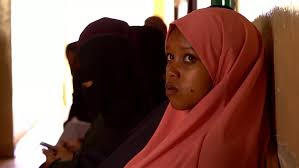 For families living in Europe and with origins in Africa, the Middle East and Asia, holidays are often synonymous with returning home. But these family reunions sometimes turn into a living nightmare for young girls. Each year, thousands of them suffer female genital mutilation (FGM), without their prior knowledge or consent, in their parents’ country.

Our reporters Miyuki Droz Aramaki and Sophie Guignon met with young victims and followed doctors and activists who are working to change mindsets about FGM and treat these women.

Despite feeling deep pain and suffering family pressure, some young Europeans agreed to share their stories with us anonymously. We met a 25-year-old British woman of Somali origin. She can never forget her very first stay in Somaliland, a semi-autonomous region of Somalia, at the eastern end of the Horn of Africa. She was ten years old and suffered genital mutilation by surprise: “I saw a few women sitting inside. One grabbed me, started pulling on my clothes. There was a moment of complete helplessness when I felt a quick but sharp pain.” In addition to the pain, she felt deprived of her private life and her humanity.

According to the World Health Organization (WHO), every year 180,000 young European women run the risk of undergoing FGM during a stay in their country of origin.

To understand why the custom of genital mutilation persists, we went to Somaliland, where 97 percent of women undergo FGM. Female circumcision is supposed to preserve the honour and virginity of young women, by preventing them from enjoying any sexual pleasure. But it causes severe physical and psychological damage for the rest of their lives, as well as complications during childbirth. Some young women have died from loss of blood while undergoing FFM. In the poor neighbourhoods of the capital Hargeisa, we met a circumciser, a mother in her forties with a large family. For her, performing FGM on young girls, whether they’re locals or Europeans on holiday, represents a simple livelihood to feed her family and children.

But in Somaliland, activists are mobilising to fight against the practice which is based on false ancestral beliefs. Dr. Edna Adan is one of the pioneers of this battle. At 82, she continues to run the city’s main hospital, which she founded and where she trains doctors, nurses and midwives. These health professionals are trying to convince young mothers not to reproduce the violence that they themselves suffered. Adan believes that protecting young Europeans requires a change of mentality on the ground and legislation that punishes mutilations.

While filming our documentary, we also met doctors in France who treat young women who have been mutilated abroad. Many of these women try to meet the famous urological surgeon Pierre Foldès, who is based in the Paris suburb of Saint-Germain en-Laye. He is the first surgeon in the world to have developed a technique for reconstructing the clitoris, the female organ removed during FGM, and has fought for the surgery to be reimbursed by social security. His method enables traumatised women to be to “repaired”, but also to recover sexual pleasure and the hope of giving birth safely. Their healing is both physical and psychological, so that they can finally enjoy the life they have chosen.