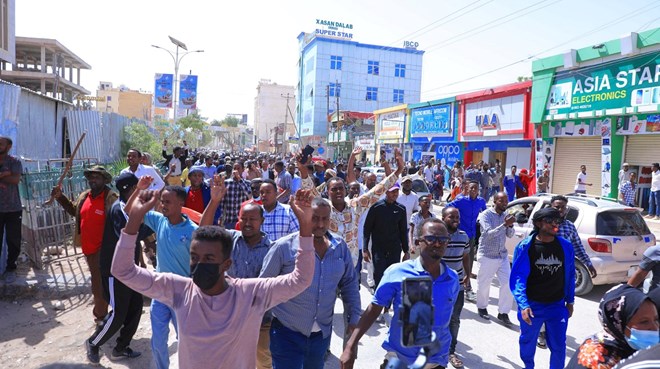 At least three people were killed and 89 others wounded in clashes between security forces and opposition protests demanding timely presidential election, police said on Thursday.

Speaking to reporters in Hargeisa, a senior police official said among the injured were 62 police officers, adding that 100 protesters were arrested for attacks on security forces.

Videos circulated online showed police throwing stones and using live ammunition against protesters in several major cities, including Hargeisa, Burao and Erigavo. Two protesters were killed in Hargeisa while another died in Erigavo.

Speaking shortly after demonstrations concluded, the leader of Ucid opposition party said they would announce an interim government on Saturday after engaging in consultation with the break-away region’s political stakeholders.

Opposition parties demanded timely presidential election and called on the incumbent President Muse Bihi to step down as his term nears an end.

The United States joined calls for return to political dialogue between the ruling and opposition parties to bring an end to the current stalemate in the break-away region, which has enjoyed a relative stability since the collapse of Somalia’s central government in 1991.

“We strongly urge the ruling and opposition leaders in Somaliland to avoid violence during the demonstrations and return quickly to political dialogue,” US embassy in Somalia tweeted.

Leaders of opposition parties are insisting that the government should hold presidential election on Nov. 13, but the incumbent President demands the conduct of elections for political parties before the self-proclaimed state could pick a new president.

Efforts by traditional leaders and seasoned politicians in the region to mediate an end to the current dispute have failed abysmally. Opposition leaders blamed the President’s “obstinacy” for the collapse of talks.