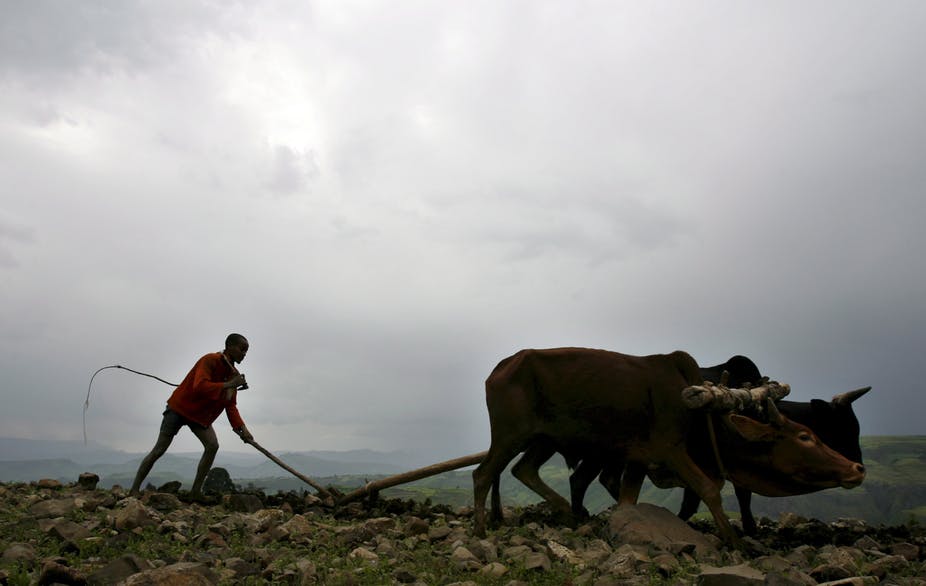 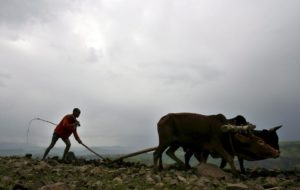 An Ethiopian farmer in the Amhara highlands outside the historic village of Lalibela. EPA/Stephen Morrison

Abiy Ahmed has made a raft of radical steps since taking over as Ethiopia’s prime minister in April 2018. He has redressed some of the wrongs committed by his own party, brokered peace with Eritrea and released political prisoners. Abiy has also invited opposition political groups back into the country and overseen the reunification of a splintered Orthodox church.

Abiy’s approach is summed up by his philosophy of medemer, or inclusivity and unity. His reforms have led millions to believe that positive revolutionary change is on its way. But there’s one significant group he has yet to address: the rural majority.

More than 80% of Ethiopians live in rural villages beyond the reach of mass media. So far, they have not been included in the ongoing national conversation. Yet, they contribute significantly to the economy by providing 85% of all employment and 95% of agriculture outputs.

Past governments exacted revenue from rural people but ignored their voices in policy making. During Haile Sellasie’s rule, rural people had to pay a share of their produce to their chiefs in order to keep their land. Mengistu Haile Mariam’s marxist regime  introduced land reform based on its communist ideology but required rural people to fund and fight its wars.

The current government came to power with the promise of ensuring food security but it politicised ethnic identity and is currently focusing on rapid economic growth through the commercialisation of agriculture.

Consistently, Ethiopian governments created their own policies without listening to rural people first. But there can never truly be any hope for the country’s future if the forgotten majority continue to be ignored.

The reality for rural people

Since the 2000s, Ethiopia has been praised for fast economic growth. The government celebrates small holding farmers as the drivers of its success. But, so far, economic growth has not translated into a better life for the rural poor.

In addition to natural disasters, rural people are victims of an ill-conceived land policy. Land is controlled by the government. Farmers don’t own their land. They’re simply granted the right to use it. Land scarcity is a major problem. More than 60% of rural households survive on less than one hectare of land. A lack of access has led to young people being uprooted from rural areas.

Yet, the government leases large tracts of land to private investors to spur economic growth. From late 1990s to 2008, almost 3.5 million hectares of land was rented to investors at very low prices for a period of up to 99 years. The government advertises that 11.5 million hectares of land is currently prepared for private investment. Investors mainly focus on producing flowers, biofuel, and other export products. These in turn cause water shortages and environmental problems.

In a country of 103 million, where the survival of 80% of the people depend on subsistence agriculture, the priority given to private investors raises significant concerns.

Urban Ethiopians view foreign investors as a sign of progress. They see this land-grabbing as a sign of development. Yet the commercialisation of agriculture is being used to concentrate wealth in the hands of a small ruling class. It has increased food prices for the poor.

In Gambella, 70,000 people have been moved to new areas. Many more are believed to have been moved off their ancestral lands to make way for the country’s vision of becoming the world’s leading sugar producer.

Abiy has yet to address any of these issues. So far, he has shown no signs that he intends to change the government’s land policy.

One of the major hurdles facing the forgotten rural majority is the colonial mindset of many urbanites and people in power. The exclusion of rural people from the affairs of the state is not new. But it has intensified since 1974.

Traditionally, rural Ethiopians had institutions that influenced the power of their leaders. Leaders needed to fulfil and be accountable to tradition. They were respected more than feared.

This colonial mindset, that has internalised western knowledge as progressive and Ethiopian knowledge as backward, is one of the major factors excluding rural people from reform and political debate. Rural people are seen as antithetical to progress, or simply ignorant of how things can be done better. For example, ten years ago the World Bank blamed Ethiopia’s “backward farming system” for acute food shortages.

Across the country, rural people understand land not as a natural resource that can be converted into cash, but as a source of life, spirituality, culture, and identity. Any cursory study of land-grabbing in Ethiopia shows that government policy has resulted in ongoing violence against the livelihood and culture of rural people. Rural people still feed the majority of the population; protecting them protects the rest.

Everything Ethiopians are proud of today, from their ancient culture to their independence from colonialism, came from the culture of rural life. It is this rich cultural knowledge that should be drawn upon, rather than continually looking out to the west.

Despite all of Abiy’s inspirational reforms, there can be no true progress for Ethiopia without listening to the rural majority.