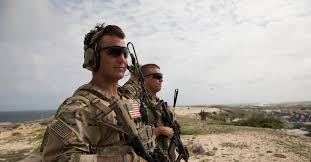 The US goal in Somalia is to weaken al-Shabaab militarily in order to achieve a political settlement, senior officials of the US Africa Command said on Wednesday.

“We’re not talking about annihilating it, getting rid of it completely,” Ambassador Alexander Laskaris, Africom’s civilian deputy commander, said of Shabaab in a press briefing.

Instead, he explained, the US aims to “slowly degrade it, reduce it to manageable proportions.”

Insurgencies of the sort underway in Somalia for more than a decade are likely to end by means of “a hybrid of military pressure and political accommodation,” Mr Laskaris suggested.

“I don’t care how it’s done,” he added in regard to the way in which a political settlement might be reached between Somali warring parties, “but it needs to be done consistent with Somali culture.”

The political dimension of the conflict in Somalia is at least as important as the military dimension, Mr Laskaris said. Engaging with Somali civilians while exploiting divisions within Shabaab is less expensive and potentially more effective than military operations, he noted.

“Al-Shabaab is not a monolith,” the State Department official said. Some of the clans and sub-clans that supply it with fighters may be more willing than other sources of Shabaab strength to strike deals with Somali authorities, he suggested.

“It’s appropriate to explore how to coax people off the battlefield,” Mr Laskaris added. A key aim, he said, is to “create an exit ramp” whereby defectors can safely leave Shabaab’s ranks.

The stepped-up US air attacks on Shabaab targets have put the group “on the defensive,” added Rear Admiral Heidi Berg, Africom’s intelligence director.

“They are on the defensive, restrained in their movement and broken in their ability to command their forces,” she said.

Strikes from the skies, which Africom says have killed scores of Shabaab fighters, have disrupted the group’s command-and-control capabilities, limited its mobility, and spread fear and mistrust within its ranks, Ms Berg said.

Defections have increased as a result, she said.

The toll taken by US attacks is “challenging clans’ willingness to support al-Shabaab… as they see their recent recruits being killed,” Ms Berg told journalists on Wednesday, from Stuttgart, Germany- the Africom headquarters.

She cautioned, however, that Shabaab remains a resilient organisation still able to carry out assassinations and deadly bombings.

“Al-Shabaab remains adaptive, resilient and capable of attacking Western and partner interests in Somalia and East Africa,” she said.

The Islamist militants are “well positioned to take advantage of a security vacuum should the AU continue its draw-down,” Ms Berg warned.

Created in October 2007, the US Africa Command (Africom) is one of six of the US Defence combatant commands around the world and is charged with military relations with African nations often through the African Union.

In Somalia, it has focused on aerial support, targeting militants as the African Union Mission in Somalia (Amisom) troops and those of the Somali National Army battle from the ground.

But some critics say every of those drone ambushes has thrust the militants into action for revenge.

“Airstrikes were deemed to have degraded Al-Shabaab’s operational capability and freedom of movement,” Secretary-General Antonio Guterres told the UN Security Council in a report last week.

“They have also led, however, to increased Al-Shabaab movement into urban centres, in particular Mogadishu, where their forces are less likely to be targeted from the air.”

Shabaab retains resources sufficient to continue its fight, Mr Laskaris acknowledged indirectly. He noted that the insurgency pays its soldiers more generously — and more reliably — than the Somali government does in the case of its own troops.

A third Africom official — Chief Master Sgt Ramón Colón-López, the command’s senior enlisted leader — said at the briefing that one of his duties in regard to Somali government troops is to help ensure they are being paid and fed properly “so they don’t go fighting for the wrong side.”

“In countering terrorism, the State as impartial mediator is so important to solving all levels of disputes. State actors need to have a commitment to remain a neutral arbiter. Citizens are going to terrorist organisations for basic justice.”