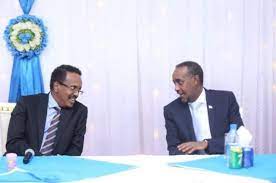 The United States Bureau of African Affairs said on Wednesday that Somalia’s President Mohamed Abdullahi Farmajo and his Prime Minister need to resolve their differences immediately as tensions in Somalia faced long-delayed polls.

It came after a rift between Somalia’s most powerful leaders reached new heights over the past weeks, over the murder of a female spy whose family continues to demand justice in case involving senior members of the Somali National Intelligence and Security Agency (NISA).

Presidential elections slated for October have also hit another delay this week due to the ongoing political wrangling amid fears that the vote could face another postponements.

The National Consultative Council “must complete elections this year.” US Bureau of African Affairs tweeted on Thursday following meeting between the State Department officials and Somali FM Mohamed Abdirisak.