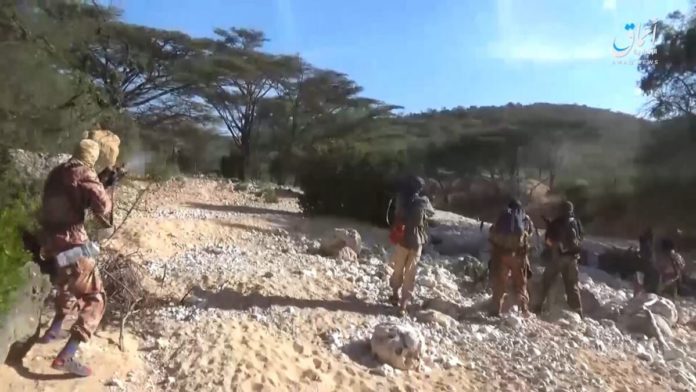 The U.S. appears to be stepping up airstrikes in northern Somalia’s Golis Mountains, where the country’s Islamic State affiliate and al-Shabaab have been battling for territorial control.

On Sunday, the U.S. conducted an airstrike that killed three al-Shabaab militants in the Golis Mountains. This was the sixth airstrike in the last month against IS-Somalia and al-Shabaab in the region.

AFRICOM maintains that the airstrikes help to keep militant leadership and recruiting efforts in a state of flux, though al-Shabaab remains a lethal insurgent group in many rural areas across the country.

U.S. airstrikes in Somalia have typically been focused against al-Shabaab militants, who are aligned with al-Qaida and have historically dominated the insurgency racket in the country. However, IS-Somalia has managed to carve out an operational niche in Somalia’s northern Puntland region over the past few years and has extended its operations to the southern portions of the country, including the capital of Mogadishu.

IS-Somalia has only a few hundred members, analysts say, but the group still threatens al-Shabaab’s dominance. The two factions have been officially at war with one another since late last year. In the midst of the infighting, U.S. airstrikes have continued to target both groups.

“We constantly assess and exploit intelligence sources as they develop,” AFRICOM spokesman John D. Manley said in an email. “In coordination with the Federal Government of Somalia, the last few days presented opportunities to successfully reduce terrorist influence and activity in the Golis Mountains.”

Al-Shabaab and IS-Somalia have been periodically clashing over the past six months in the northern Puntland region, according to an article for the Combating Terrorism Center at West Point.

“So far, the majority of the clashes have been confined to the Puntland countryside, but this could change if ISS continues to make inroads in southern Somalia,” Caleb Weiss a research analyst and contributor to FDD’s Long War Journal, wrote in the Center’s article.

“For its part, Puntland security forces have worked to exploit the infighting by targeting jihadi fighters in the mountains near Bosaso,” Weiss said, referencing a major seaport within the Puntland region.