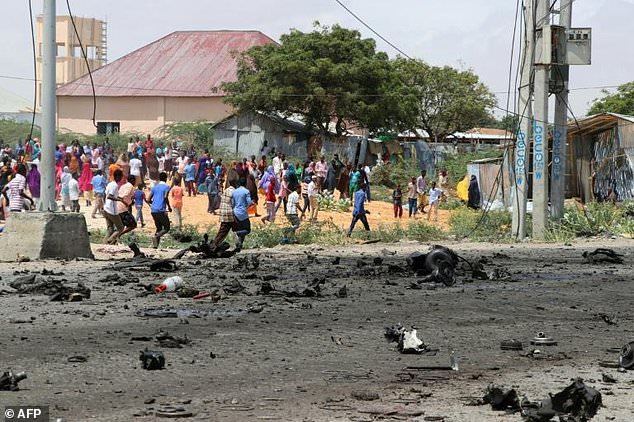 The aftermath of a suicide bomb attack in the Somali capital, Mogadishu on October 1, 2018 and claimed by the Islamist group Al-Shabaab, 37 of whose members the US military said it had killed in its latest air strikes

US air strikes in Somalia killed an estimated 37 fighters from the militant Islamist group Al-Shabaab, the US military said Tuesday.

The two air strikes were carried out Monday near Debatscile, the military’s Africa command said in a statement, adding that the “air strikes did not injure or kill any civilians.”

It said the first “precision strike” killed 27 militants in a “planned and deliberate action.” The second strike killed another 10 fighters.

The US military said the strikes were “conducted in support of the Federal Government of Somalia as it continues to degrade Al-Shabaab.”

Last month, the US military said it had killed 60 Shabaab fighters in a single air strike, the largest since an air raid on one of the Islamist group’s training camps that killed around 100 fighters in November 2017.

Air assaults and missile strikes have increased in recent months against Shabaab, an Al-Qaeda affiliate fighting to overthrow the internationally backed Somali government in Mogadishu, which has the support of an African Union force.