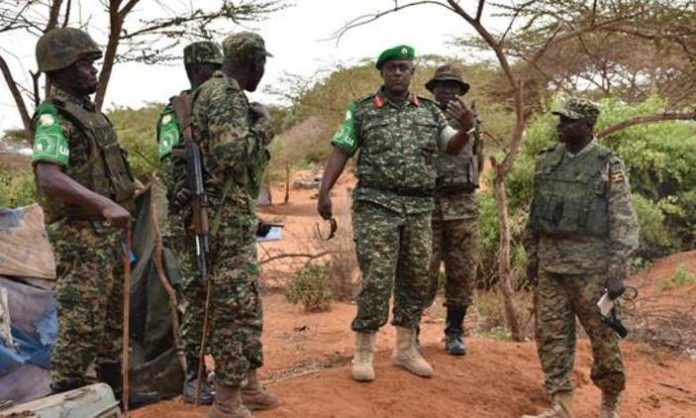 The troops in Battle Group XXVI are part of the African Union forces, deployed in Sector I, in Somalia’s Lower Shabelle region.

Brig. Kabango who succeeded Brig. Gen. Paul Lokech as contingent commander in December 2018, encouraged the troops to work closely with host communities in their Areas of Operation.

“Do not lose touch with the population,” Kabango said.

In Barawe, he toured Barawe Airfield, where a runaway is presently under construction, with funding through the Federal Government of Somalia under the Somali Stability Fund (SSF). He was flanked by Col. Topher Magino, the commander of the Ugandan Battle Group XXVI and other officials.

The battle group commander said his troops were working with the Somali security forces to end extortion of local residents by Al-Shabaab militants.

“Al-Shabaab are facing financial constraints since most of the coastal cities which they used to bring in illegal supplies were captured and most of the towns are now under the control of the Federal Government. They have resorted to manning checkpoints to extort money from residents and are also using other unscrupulous means, to collect revenue illegally, to sustain themselves,” said Col. Magino.

Working jointly with the Somali National Army, the battle group has been instrumental in securing Main Supply Routes, carrying out patrols, clearing roadside Improvised Explosive Devices and escorting humanitarian convoys in their area of operation.

Brig. Kabango is on a familiarisation tour of all AMISOM Forward Operating Bases in Sector I.