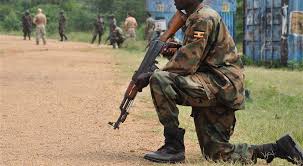 A Uganda People’s Defense Forces (UPDF) Captain in Somalia has committed suicide after shooting his colleague.

The soldier whose identity hasn’t been established reportedly turned his gun on himself after shooting his colleague for an unknown reason. Ministry of Defence and UPDF spokesperson, Brigadier Richard Karemire confirmed the incident but declined to give details.

This incident comes exactly one month after several others soldiers shot at themselves last month on May 13, 2019. Details of that incident have also remained scanty despite the confirmation by Brig Karemire.

Incidents of soldiers killing themselves or civilians have become common in the recent past. In 2016, Sgt Isaac Obua shot dead seven of his colleagues at Makindye military barracks before he was gunned down.

In December 2018, the UPDF court martial sentenced Pte Newton Okello to 80 years in jail for shooting dead a pregnant woman, her husband and their son. In 2013, Private Patrick Odoch killed 11 people near Bombo barracks.