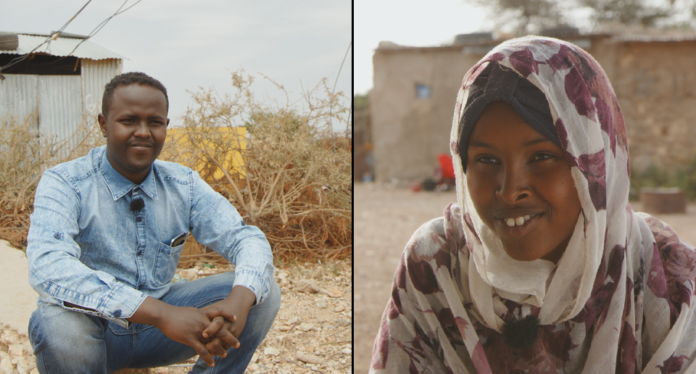 After a long period of colonialism, war and dictatorship, Somaliland claimed its independency on the 18th Mai 1991, but it remains unrecognized in large parts of the world. Far apart from international attention it grew rapidly from the ashes of the war to a country with democratic structures. The documentary film “Unrecognized: We are Somalilanders” sheds light on this often overlooked country. The protagonists Marwo, Sahra, Hamsa, Abdi and Nimco give the audience insights into their life realities which couldn’t be more different: a graduate in the city, a refugee in a camp, a diaspora choosing a new life and two farmers struggling with droughts.

Five chapters aligned to their daily routines and divided through the daily Islamic prayers give the viewer a chance of a first-hand perspective on Somaliland. The central topics are the protagonist’s everyday lives, politics, their private history as well as the country’s history. In addition, the film wants to take the audience on a journey through the diversity of this country: the pastoralists walking with their camels and goats in the steppes, the pristine sand beaches; the almost endlessly seeming rocky deserts and the primeval forest on the Daalo mountains.

Everyone who expects a documentary film about `the poor Africans´ shattered from war, incapable to manage themselves and dependent from western countries, will be disappointed though: This film deals with a country that overcame war and dictatorship with the involvement of traditional African authorities alongside parliamentary politics with no international involvement. Certainly, this film is as well no hymn to Somaliland, but rather shows the real struggles Somalilanders are facing. “Unrecognized. We are Somalilanders” gives the Somalilanders the frame to speak for themselves!

“What fascinates me the most is that this small country perfectly illustrates the big world issues: maintaining democracy, facing the results of climate change and handling migration flows.” Marlene Mayer (director)