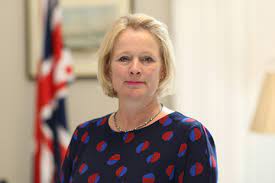 The UK government has said that it will not recognize  SL as an independent state unless Somaliland, Somalia and other African member states deliberate on Somaliland’s state of limbo, a British minister has revealed.

UK Minister for Africa, Vicky Ford said the statement in a response to a request from fellow MP, Danny Kruger that the UK, in line with the rest of the Int’l community does not recognize Somaliland as a sovereign nation.

He further clarified that it is incumbent upon SL and Somalia to engage and decide about their future.

Ford said: ” Our policy remains clear that it is for Somaliland and Federal Government of Somalia to discuss their future relations, and for neighbors in the region to take a crucial role in recognizing any new settlement between the two sides.”

However, she noted that the UK maintains a permanent diplomatic presence in Hargeisa and continues to offer assistance in infrastructure support, including the construction of the Berbera-Ethiopia highway, police training and counter-terrorism among other areas of support.

Ford noted that Somaliland is a successful and well governed part of Somalia, ‘with which we can collaborate effectively, unless and until Somalia and Somaliland agree on another arrangement.’

Somaliland broke away from Somalia in 1991 and declared itself independent but has not received international recognition.