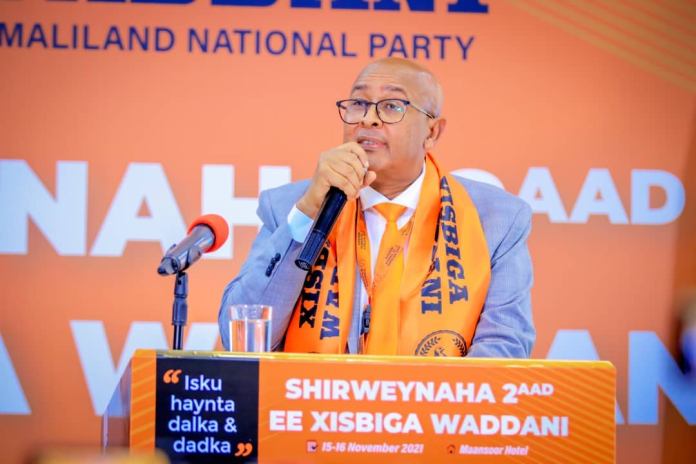 The Chairman of the Opposition party of Waddani Mr. Abdirahman Mohamed Abdillahi “Cirro”, in a speech to the party’s second general assembly questioned the value of Somaliland’s bilateral ties to the quest for international recognition and called for improved ties with the People’s Republic of China instead.

“It is necessary for Somaliland’s recognition to find a government that is a member of the United Nations Security Council with veto power. At this time Somaliland has close allies and it would’ve been nice if our government improved its relationship with China which is bringing vast development to the region and an unrecognized such as Taiwan adds no value for our question for recognition. We must always improve how we deal with important nations.” Said Chairman Cirro.

Chairman Cirro stated that Somaliland’s bilateral ties with neighboring countries have declined under President Muse Bihi Abdi’s leadership and added that Somaliland has not been invited to the inauguration of Prime Minister Abiy Ahmed of Ethiopia’s reelection. Chairman Cirro who is running for President for the second time has previously questioned Somaliland’s largest direct foreign investment by DP World to develop the Berbera Port and corridor. He has called for the prosecution of President Bihi and his predecessor President Ahmed Mohamoud Silanyo for the deal with DP World. The People’s Republic of China has approached Somaliland following the establishment of bilateral ties with Taiwan and offered a conditional development package which Somaliland has rejected and since China and Somalia have both condemned the newly established bilateral ties. The People’s Republic of China claims Taiwan as part of its territory much like Somalia claims Somaliland. It is unclear how Chairman Cirro plans to convince the Chinese government and garner support for Somaliland’s case for independence. Although Mr. Cirro did not explicitly state termination of bilateral ties with Taiwan should he be elected President in 2022, it’s clear that pivot to China is featured prominently in his foreign policy posture. Efforts to reach Chairman Cirro and other Waddani officials for clarification on the party’s position on Taiwan, potential pivot to China, and how the latter will reconcile its budding relationship with Somalia’s Federal Government and its pledge to respect the territorial integrity of Somalia with the diplomatic ties Chairman Cirro has called for with the People’s Republic of China. Taiwan’s Representative Ambassador Allen C. Lou did not respond to request for comment on Chairman Cirro’s statement on Somaliland’s bilateral ties with Taiwan.