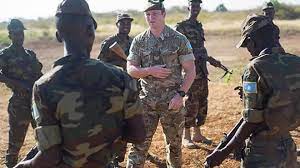 The UK ambassador to Somalia Kate Foster said on Monday that the United Kingdom will withdraw support for Somalia’s army if troops it has trained in the town of Biadoa in Southwest regional state steps into politics.

“We are committed to helping Somalia rebuild its army, but if the SNA troops we train in Biadoa military base will be involved in politics, we will stop training, withdrew supports and exit,” the UK ambassador to Somalia said during a twitter space discussion.

The comments follow remarks by US diplomats in Mogadishu, who said weeks earlier that the US government will review its support to Somalia’s Danab elite force over its participation in fighting against former ally, Ahlu Sunnah Wal Jama’ah in the course of which a member of commanders had been killed.

Somalia’s government has not responded to the comments and this comes months after the opposition groups have accused the army and security forces of being involved in politics.