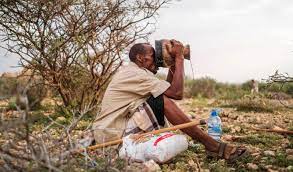 The United Kingdom’s envoy for Famine Prevention and Humanitarian Affairs Nick Dyer announced an additional $8 million relief package to deal with the effects of a worsening drought in Somalia following his recent visit to the Horn of Africa nation, UK embassy in Moagdishu said on Sunday.

It comes weeks after UK Minister for Africa Vicky Ford announced $10 million package of support for drought relief efforts in Somalia in January.

UK Humanitarian chief Nick Dyer visited Somalia to call for a “concerted effort to prevent millions of people losing their lives to the threat of famine”, UK embassy in Mogadishu said in a statement.

“The funding will go towards providing vital assistance, such as cash to buy urgent food supplies and water to vulnerable families across Somalia,” it added.