In Somaliland, every drop of water is precious. Ravaged by the worst drought in a century, over half of Somaliland’s 18 million livestock perished between 2014 and 2017, leaving already poor families without food or income. Water storage is vital to help communities survive but in many regions landmines have prevented people using the land for decades.

A few hours southeast of Hargeisa, Somaliland’s capital city, is the settlement of Jeenyo Laaye. During the fierce civil war of the 1980s this was a strategic location for the Somali National Army due to its proximity to Ethiopia and the insurgent forces attacking from across the border. To defend the position, large numbers of landmines were laid, and here they have remained—a lethal legacy beneath the dusty earth.

Ali Esse is 50 years old and is father to six children. His family had always lived in Jeenyo Laaye but were forced to flee during the civil war. When the fighting ended they came back home and he now owns a tea shop in the village with his wife. However, since returning, the fear of landmines has stopped the development or productive use of any land surrounding the village.

Thanks to UK Aid, HALO mine clearance teams were able to make the land safe, providing much needed employment for the local community. In total 513,072m2 of land around Jeenyo Laaye was cleared, with 68 anti-personnel mines and 29 anti-tank mines destroyed by HALO. Each landmine could have caused devastating injuries or killed local residents.

Today Ali Esse is busy digging a traditional Somali water storage facility (known as a berkhad) on the once dangerous land. When completed it will hold 570,000 gallons of water and is vital if the local community is to withstand the drought and sustain their livestock. Ali expects the cleared area will accommodate over 100 berkhads and evidence for this expansion is already visible—just yards away Nasir and Ibrahim are digging their own berkhad for their herd of goats and camels. As their spades cut through the earth, they are only 30 metres from where HALO destroyed a line of anti-personnel landmines. 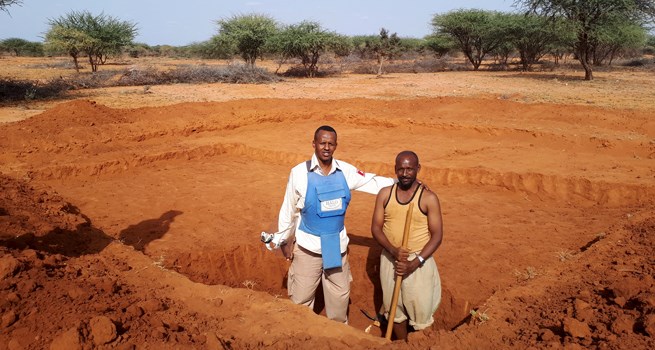 “We haven’t been able to use this land since 1988. Mines were the enemy. Now there is peace.”

HALO has been working in Somaliland since 1999, clearing landmines so that land can be returned to productive use, ensuring goat and camel herders can travel the landscape without fear and preventing devastating accidents. However, our work is not yet complete: in January, a truck carrying 30 people hit an anti-tank mine near Lughaya village, fortunately, no one was seriously injured but it is a stark reminder that Somaliland continues to need support. The new funding from the UK Government will prevent more lives being devastated by landmines and the vision of a mine-impact free Somaliland to become a reality. 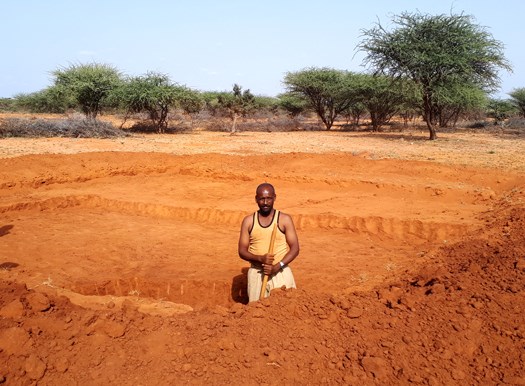 Ali Esse predicts that the land cleared by HALO will accommodate 100 berkhads, vital water storage for when the rains fail to arrive. 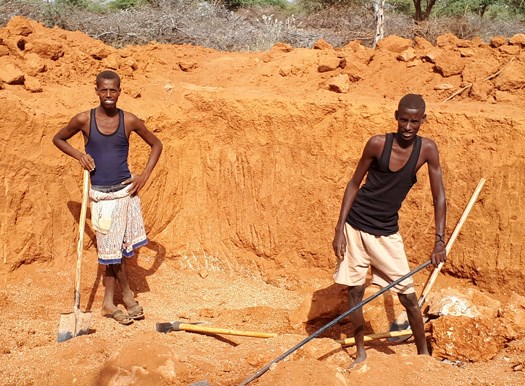 Nasir and Ibrahim Constructing a Berkhad for their Animals

Nasir and Ibrahim began constructing a berkhad as soon as HALO had cleared the landmines so that they could secure water for their herd of goats and camels.