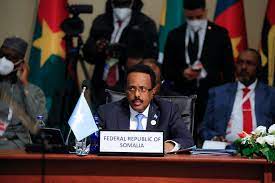 Hashi made the remarks during an interview he gave to Universal Somali TV, and stated that the two leaders did not discuss the issue of armed drones and reports that Ankara has already shipped Bayraktar TB2 drones to the capital Mogadishu.

The two leaders focused on their country’s friendly ties, cooperate on key development forefronts  and fight against Al Shabab, which has links with Al-Qaeda, the spokesman further asserted.

Somalia’s President Mohamed Abdullahu Farmajo travelled to Turkey to attend Turkey-Africa summit during which he has given a speech focusing on the economic chances in Somalia. Somalia is currently holding parliamentary polls which is marred by fraud and widespread manipulation of votes.