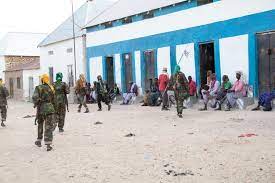 Al Shabab militants have taken over areas close to the airport of the coastal town of Kismayo in South Somalia’s Lower Juba region.

The Islamist fighters have entered the town of Yaaq-raar nearby to the administrative seat of Jubaland state without facing any resistance from paramilitary regional troops, who had withdrawn hours earlier.

Al Shabab said it had captured the areas in a statement via its affiliated media, though reports say its fighters have retreated from the town.

The Islamist fighters earlier captured the towns of Mataban, Go’don, El-dhere, Bergadid, and Ba’da- all on a highway linking the capital Mogadishu to the northern regions of Somalia, though they later withdrew from some of the areas.

Jubaland authorities have not commented on the claim made by the Islamist fighters.