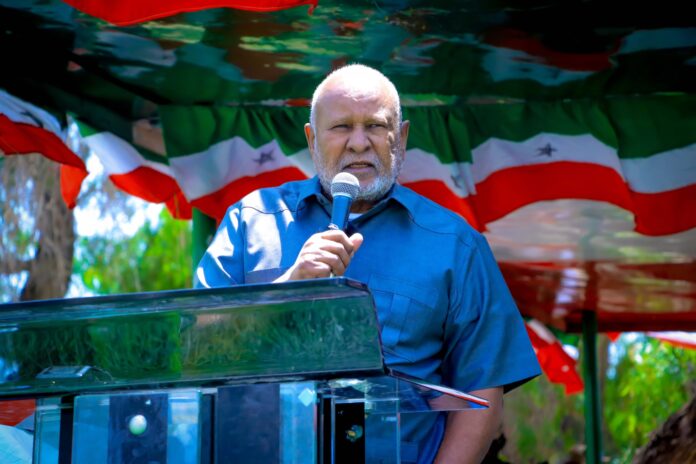 The Speaker of Somaliland House of Elders (Guurti) Hon. Suleiman Mohamoud Adam thanked the people of Erigavo for their warm welcome and show of solidarity with the government.

He was speaking to thousands of jubilant inhabitants of Erigavo, at the Freedom Garden.

“This is a clear indicator of your civility as a people of Sanaag. We are very happy about your warm welcome. I have a lot to talk about however the president is with us so I shall make my speech brief”, Hon. Suleiman said.

He went on to reveal the agenda of the visit to Erigavo.

He said, “We have come to attend an important meeting by our brothers of the Wersangali community. They have decided to be part and parcel of Somaliland and its development agenda. The Wersangali People would like to be included in all government departments and they also want to establish local councils and districts so that their people can be part of the successful Somaliland government.”

He thanked the Wersangali clan for initiating contact with the Somaliland government and promised that the government will fulfill all of their demands.

The senate speaker accompanied the president to Sanaag regional capital Erigavo to initiate and implement development projects and participate in a meeting with the Wersengali community. 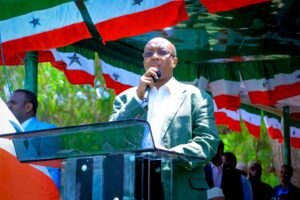 Similarly, The Speaker of parliament Hon. Abdirizak Khalif Ahmed has thanked the people of Sanaag for the warm welcome accorded to the presidential delegation.

He said “As you are all aware the intention of the visit is to inspect different development projects initiated by the Somaliland government, gauging the quality of life of our people and meet with traditional elders of the Wersangali people led by Sultan Saeed Abdisalam. They had been meeting for the past two weeks and the government was also invited to note the deliberations of their discussion and signing of a memorandum.”

He thanked the traditional elders, intellectuals, and leaders from the Wersangali tribe for showing solidarity with the people and government of Somaliland.

The speaker also sent his message of appreciation to the two ministers in government representing the Wersangali community.

He added that the government will decentralize its departments to reach far and wide in Sanaag and the newly named Dahar province.

He acknowledged that all the needs of the region could not be completed in one day hence the government will give priority to important institutions of governance.

The Speaker accompanied the president to Sanaag region to implement development projects.