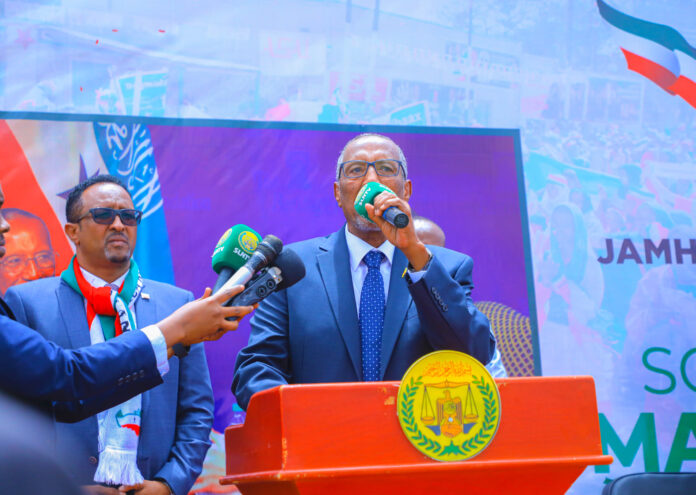 We must promise one another that we will work to promote Somaliland’s case together as one, he says

The President of the Republic of Somaliland, H.E. Muse Bihi Abdi was given a rousing reception yesterday Saturday 26th March 2022 as he returned to the country after a fortnight visit to the US.

It is worth noting that what the president achieved in the working trip is the greatest diplomatic achievement the nation has reached for over three decades.

Thousands of people on the front porch of the airport cheered and felt on their faces, waving flags, flowers and banners with welcome messages, President Muse delivered a historic speech to the people of Somaliland.

He described his visit to the United States as a historic victory for the Somaliland community which will go down in history and a shock to the country’s envies.

He told the people of Somaliland that they had “returned with great joy and that trip was a historic one travelled to the United States hence victorious which will send shockwaves to the enemies of Somaliland”.

He noted that Somaliland would continue to work hard with every government in the world. The United States has made it clear that it is ready to deal with Somaliland. He sent a vibe to Somalia reminding the audience that whenever the country made contact with other sovereign nations Somalia severed relations with them hence he wondered aloud whether this time around it would dare cut ties with the United States for hosting Somaliland.

The President announced to the public that the voice of Somaliland nation was soundly heard loudly, especially at main stage where the world’s major powers were witnessing its progress, listening and acknowledging our entity.

“If yesterday the superpowers turned a blind eye to us, now it’s a fact that the world’s largest government were listening to the voice of Somaliland and their feelings,” said President Abdi.

He shed light on how they spent during two weeks of the working visit, and had a number of meetings with US administration, executives, and the US legislative members, think-thank intuitions, financial agencies and businessmen. He also mentioned meeting with Somaliland diaspora who were very fond patriotic to their nation.

“During the two weeks, we have attended and shared with US administration 23 meetings, and we discussed mutual interests of the two nations, and our nation gained positive appreciations.

Finally, the President proceeded to the Presidential Palace, where he was welcomed by Cabinet members, politicians and other senior members of the KULMIYE party and civil society.