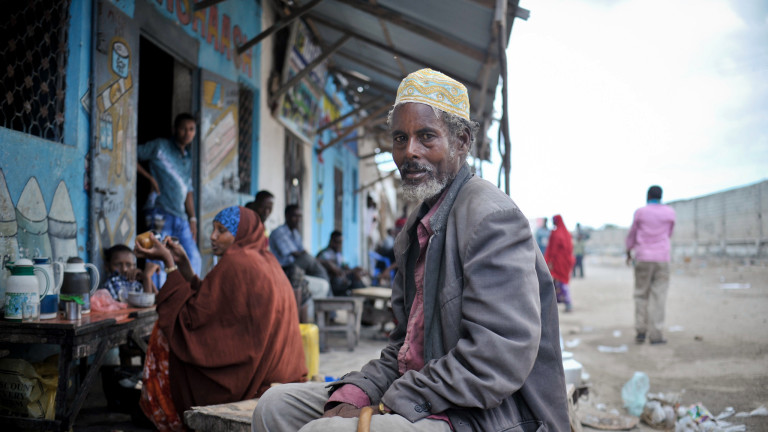 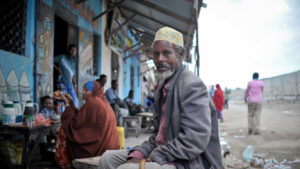 Language is the essence of Somali society: the spoken word is directly linked to power and influence, and oral poetry is synonymous with Somali culture itself. Somalis simply talk. They talk in the nomadic countryside as they set up camp or water their camels; they talk when they encounter one another on journeys, at trading posts, at wells; they talk in huts and in houses, while resting away from the sun during its most intense hours; and in the towns and cities that have grown tremendously in size and importance in the 58 years since Somalia’s independence, they talk in cafés, a form of Somali talk jocularly known as fadhi ku dirir, meaning “fighting while seated.”

These are the café talkers. They are the Somali men gathered in public spaces to discuss and loudly debate social and political problems, from international current events to domestic issues and clan affairs. They are the men gathered in homes and the men gathered in mafrish—or qat chewing houses—discussing politics over sessions of the leafy, stimulant drug. They are also the men in Tim Hortons and Starbucks, the men in Somali neighborhoods across the diaspora, thousands of miles away from the events in Mogadishu and Hargeisa that they dissect and argue about. They are the men dismissed as “café talkers”—their chatter described as “fighting”—because of what they have in common: they are the men whose marginality from the political power structure gives them a desire to talk about it.

Chatter, argument, gossip, and rumor in the cafés has been a political problem for governments in Somalia for a century. In 1953, a Somali soldier of the British Army named Ibrahim Haji Hassan wrote a letter to the editor complaining about the “99 percent of . . . Somalis who are absolutely ignorant of the intentions and policy of the government towards their country.” Northern Somalia was then still a colonial protectorate, so the “government” he referred to was Britain; the letter was published in War Somali Sidihi, a biweekly newspaper published by the British Somaliland Protectorate’s Information Department in Hargeisa to promote policies of colonial governance to the Somalis they ruled. “Ignorance usually leads them to suspect every system or body the government forms,” as Hassan put it; the information contained in publications like War Somali Sidihi“would enable the good Somali to raise his voice higher than, or at least as high as, the ‘Coffee Shop Lawyer.’ ”

Hassan was right about the problem, at least from his perspective; widespread opposition to secular schooling and public-health interventions was led by the rumor-mongering of what the British called the “coffee shop lawyers” and the “fitna-makers” (an Islamic term for trouble or discord within the Muslim community), whose talk saw conspiracies and sinister intentions in colonial development schemes. The colonial state’s use of pesticides for locust control, for example, was widely believed to be a plan by the British to exterminate camels, and that talk led to riots between 1943 and 1945. In southern Somalia, Fascist Italian administrators banned gatherings of Somalis altogether in the 1930s, fearing the subversive potential of Somali talk.

Talkers and writers couldn’t see eye to eye. If the colonial state governed through newspapers, directives, and notices, Somalis have produced the political through fadhi ku dirir, the public sphere where political ideas have been constructed, contested, and disseminated. And so the state has always been deeply concerned about the power of political gossip; in an oral society, speakers can reach everyday people in ways writers cannot. Publications like War Somali Sidihi were written in English, inaccessible to the vast majority of Somalis who did not speak the language; the majority of Somalis would get their news elsewhere.

In the 1940s, the new technology of radio gave state propaganda a new medium. When Somalis saw Fascist Italy advance across East Africa in World War II, Somali café talk about Britain’s weakness in the Horn had to be matched with more officially sanctioned talk: after first experimenting with broadcasting in 1941, the British army launched Radio Kudu in 1943—to be renamed Radio Somali and eventually Radio Hargeisa, operated by the Information Department. Broadcasts relayed news bulletins from the BBC World Service, local news submitted from outstations across the Protectorate, and Somali music and poetry (much of which, unbeknownst to the British, criticized colonial rule in coded language). Radio Mogadishu followed suit in southern Somalia in 1951, and in 1957, the BBC World Service began to broadcast in Somali as part of its efforts to combat communism and increase British influence in the world. Radio could not replace fadhi ku dirir, however; it was simply incorporated into the practice. Men now gathered around the receiver and listened to broadcasts that gave them new topics and issues to talk about.

After independence in 1960, the new Somali Republic took over the task of nation-building and fashioning a Somali national identity, most intensively during the military dictatorship of General Mohamed Siad Barre. Following his 1969 coup, Barre declared that the country would be governed under a framework of “scientific socialism,” fusing socialist rhetoric with Somali concepts of wada-jir (unity), isku kalsoonaan (self-reliance), and iskaa wax u qabso (self-help). Hawl iyo hantiwadaag (work and socialism) would define the new era of Somali modernity, which was characterized by large-scale industrialization projects that would transform the underdeveloped state’s primarily rural, pastoral population. It was also an intensely repressive era. Somalis saw the erosion of their newly attained civil liberties in the face of Barre’s increasingly authoritarian rule, and the café talkers returned as a threat to the state. Barre’s speeches railed against the af-miishaar, or those with sharp tongues; he saw them not only as direct threats to his rule but also as the opposite of the productive, modern citizen-workers he sought to create. In the midst of the 1977 war between Somalia and Ethiopia, Barre called “the local imperialist and neocolonial agents in our coffee shops” one of the major challenges to Somalia’s war effort. Unsurprisingly, cafés were heavily watched, forcing those with dissenting views to go underground out of fear of being reported and imprisoned (and leaving the cafés filled only by pro-government talkers).

Somalia’s café talkers didn’t go away after the civil war and the collapse of the state in 1991. If anything, they proliferated; as the former Somali Republic fragmented into autonomous and semiautonomous regional states, the café talkers have become more vested in politicized clan and regional identities. Because today’s Somali governments function through a delicate balance of clan representation—from the self-declared Republic of Somaliland’s House of Elders to the Federal Government of Somalia, whose parliament is selected on the basis of a clan quota system—the intense nepotism of these governance structures has enabled a variety of Somali men with little or no political background to seek out and receive political appointments; along with belonging to the correct clan, extensive fadhi ku dirir experience is often the main qualification. Café talk remains a thorn in the side of both governments and international bodies operating in Somalia, but it can also provide a useful scapegoat: former president Sharif Sheikh Ahmed once angrily deflected a critical United Nations Monitoring Group report by claiming that the UN’s information came from fadhi ku dirir gatherings; in 2010, a Ugandan spokesman for the African Union Mission in Somalia (AMISOM) told the Voice of America that claims of a successful Al-Shabaab terrorist attack were fadhi ku dirir fake news. “Do you know something called fadhi ku dirir?” he demanded. “Those people who are making those allegations are really practicing fadhi ku dirir. We don’t have time to fight the war in the media.”

In the diaspora, the men in cafés have been displaced by conflict and made distant in both time and space. And so, fadhi ku dirir is a way of participating in political discourse from afar: like their counterparts back home, they fight while seated in the thousands of tea stalls and cafés across the Somali territories. But along with the traumatic legacies of war that have traveled with Somalis wherever they go, so too have come clan animosities and caste hierarchies. Men gravitate toward men of similar clan and regional backgrounds in search of in-depth conversation and current information regarding their own ancestral parts of the Somali Horn; when political events catch fire in Somalia, the various diaspora cliques are just as heated. The café in the diaspora is a domain where home and its affective ties are reconstituted, giving some semblance of life before displacement, while at the same time re-creating the fraught conditions of the Somali political present.

It is also worth saying that these are the café talkers: they are the men.

Across the Somali territories, cafés are an exclusively male domain, and female exclusion has always been inherent to fadhi ku dirir; only men have the social “right” to public space. Each day, at dawn, the male exodus from the household begins as the city comes back to life. Those who do not work make their way to the cafés after an early breakfast, well dressed in suits, dress shirts, slacks, or the beige- or olive-colored short-sleeve button-down shirt with matching pants known as a “safari”; they remain in armchair combat until returning home for lunch and the afternoon siesta. Those who work will join them following the afternoon asr prayers; both groups return to their homes only for dinner and sleep.

The absence of men makes the home the women’s counterpart to the café: a private space where women gather to talk, gossip, and commiserate over domestic life as they mind their children, prepare meals, and engage in the everyday tasks necessary for the household to function. In contrast to fadhi ku dirir, in which government and clan politics are heavily discussed, in the home it is the personal that is political.

Tour of Babel is a regular Popula column, in which we translate the world’s words that can’t be translated, the phrases and expressions that don’t travel (but that also, it turns out, do).