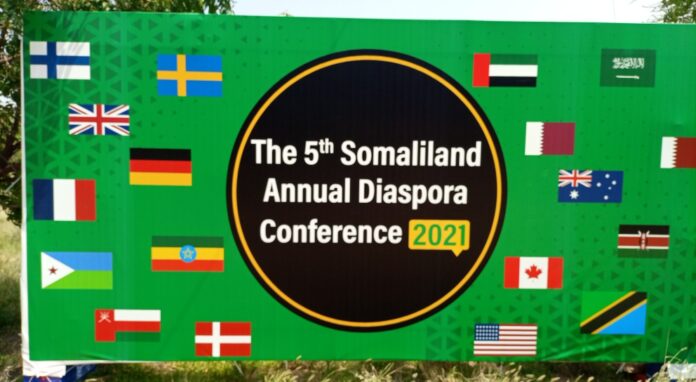 The 5th Annual Diaspora Conference of the Republic of Somaliland for 2021 under the theme “Mobilizing Diaspora Resources for the National Development” successfully closes at Grand Hadi Hotel. Nearly 200 participants mainly members from the Diaspora with professional backgrounds, community leaders, activists, Diaspora-founded businesses, experienced educationalists and senior public servants, potential business companies including the telecommunications, banks, money remitting firms, other investors, key government ministries some of them represented by ministers and directors general, other dignitaries from the Somaliland Government, MPs, officials from the Political Parties, Different national and international development partners – several LNGOs, INGOs including IOM and other UN Agencies and other development partners, a foreign delegation from the Ghana Diaspora Office and other guests attended the conference for the two days event.

In the two days, the conference focused on the key thematic areas as the role of Somaliland Diaspora promoting in Somaliland’s quest for recognition, maximizing Diaspora’s role in the economic development, Diaspora knowledge transfer, remittances & the future, harmonization of the national Diaspora policy and other topics of relevance to the issues of the Diaspora engagement. A number of remarkable presentations based on identified challenges, opportunities, and priorities on certain objectives and themes of the year were made whilst different investors, entrepreneurs and other development partners showcased their products and the services they do.

The Somaliland Recognition related panel discussion was one of the most useful sessions of the day two program and the prominent figures that led the panel included Dr. Adna Aden Ismail, Ex-MoFA Minister and Founder/Director of Edna Aden Hospital, Dr. Hussein A. Bulhan, Present of Frantz Fanon University,  Dr. Osman Sh. Ahmed Nour, Senior Advisor to the Economics for the Presidency, Ms. Fadumo Saeed, Advisor to the House of Elders, Awale Shirwac, Ex-Minister of Planning & National Development.

A number of the potential companies of Somaliland including Dahabshiil Company, Diaspora-invested businesses, SMEs and other non-state actors exhibited in the conference and took the opportunity to display their products or services and the new things they are informing the public.

The Conference Program was concluded with presenting the Diaspora Achievement Awards to different Diaspora-led charities, activists and some entrepreneurs who actively contribute to the social welfare, economic investment, education services, research development, technology, varied humanitarian and development initiatives – and not limited but these included Amoud Foundation, Gaaroodi Women, SBS, Abaarso Tech, AL Daarayn School, Somaliland Washington Community, Somaliland North America Women Association and other members in form of businesses, groups or individuals in recognition of their meaningful contribution and involvements.

At the closure of the conference, the Director of the Diaspora Office, Mr. Saad Mohamed Abdi announced declarations recommended by the conference which relates to varied strategies in the Diaspora engagement issues and enhancing the Diaspora’s role in the national development agenda of the Republic of Somaliland.