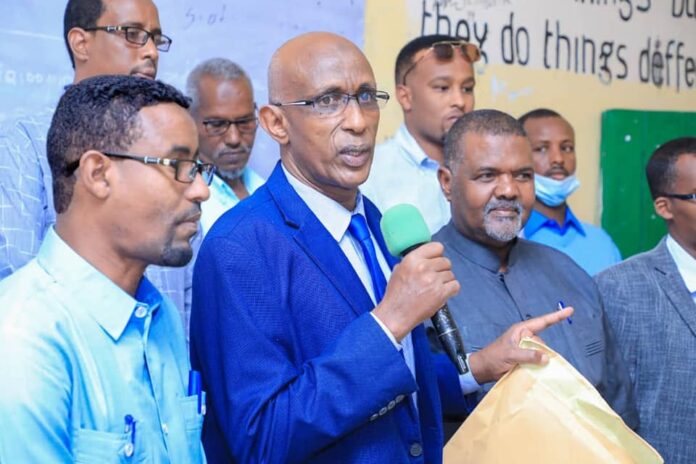 The national examinations for secondary and primary schools certificate kicked-off all over the country yesterday 19th June, 2021.

To unveil the national exercise was the Education and Science Minister Hon Ahmed Mohamed Dirie a.k.a Toorno who broke the seal of the examination papers at Sheikh Ali Jowhar Secondary School in Boorama while flanked by the Regional Governor Ahmed Mohamed Aalin a.k.a Timbaro and the area educational coordinator.

The minister had wise words for the student candidates as he underscored the fact that there were no leakages in the exams hence that the security surrounding its setting, transportation and invigilation was watertight.

SLNECB Chairman Mr. Daud said that all examination centers in the country opened safely at 8 am, with Allah grace.

Today’s Secondary exams were Islamic Studies and English, were as tomorrow’s papers is Math’s P1 & Chemistry.

The officials at the both functions echoed similar words as they gave the numbers of the candidates as 21,148 for Primary schools and 11,701 for Secondary Schools.

While they noted that the number of those being examined as having ascended over the years, they pointed out that of the total candidates, 12290 and 6885, were boys while 8858 and 4816 were girls for both primary and secondary levels respectively.

In related news the President H.E. Musa Bihi Abdi have sent a message of congratulations to the candidates, the education department and the board on the occasion of the examination exercises going on.

The Minister of Education and Science of the Republic of Somaliland Mr. Ahmed Mohamed Diriye has this morning kicked-off the National Certificate Examination in Borama, the capital of Awdal region.

Minister of Education Ahmed Mohamed Diriye and his delegation inspected areas in Awdal region such as Qulujeed High School where the final exams for the 2020-2021 school year were taking place.