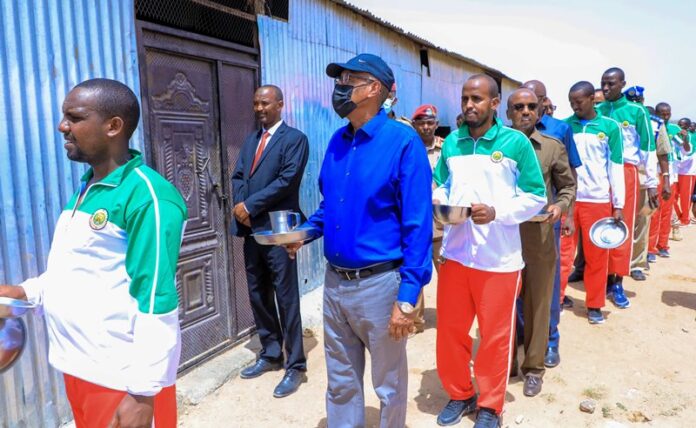 “Women fraternity should this time round join the higher echelons of the army medical health corps.”

The directive was spelt out by the President H.E. Musa Bihi Abdi in an unprecedented impromptu visit to the Dararweyne Military Academy to visit the National Youth Programme recruits whereby, for the first time ever, a sitting Head of State queued with recruits for food and dinned with them at the dining hall.

A Friday, being a public holiday, saw the President and an entourage of service commanders and the chairman of the civil services visit the academy on the 18th of June.

At hand to receive him was the programme director Mohamed Hussein Osman, popularly known as Mu’adinka.

The Head of State hailed the programme’s chief for a job well done since the inception of the programme three year ago.

He noted that thousands have since graduated and joined the public services, mainly the security forces.

He said that it did not escape noting the fact that since the recruits were encamped at the academy they were wholly quarantined, hence no outsiders, including closest relatives were allowed in during the whole course of the COVID-19 pandemic.

In the short speech the President gave after inspecting a guard of honor put in place for him, he observed the academy’s strategic service of being a central institution which teaches governance and civic education to equip the students with general coordination or procedures of the diverse institutions of the government.

He noted the fact that the women fraternity who have graduated from the academy were absorbed in different departments of the security service or other governmental institutions and that it was imperative for them to join the army medical corps.

The recruits of the youth service programme are university graduates who have majored in numerous academic disciplines.

What made the head of state’s visit un-precedent is the casual manner in which he queued for food with the recruits and sat with them chatting, at the same table, shortly after Friday Jumma prayers.