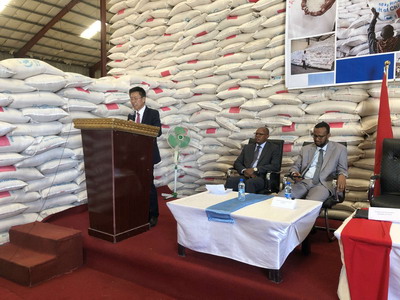 Good morning! It is my pleasure to attend today’s Handover Ceremony of China’s food aid to Somalia. On behalf of the Chinese embassy, I would like to take this opportunity to express the best wishes to all Muslims of Somalia as they celebrate Eid ul-Fitr which marks the end of Muslim holy month of Ramadan.

Last September, Chinese President Xi Jinping met with Somali President Mohamed during the 2018 Beijing Summit of the Forum on China-Africa Cooperation(FOCAC), the two leaders of states planned the development of China-Somalia relations in future. The Chinese government announced that it will provide 10 million US dollars worth of food aid to the Somali people. With this generous and timely contribution from China, World Food Programme (WFP) has procured 6,500 MT of assorted food items. These include 4400 MT of rice from China, 1,000 MT of locally produced maize, 700 MT of pulses, 350 MT of vegetable oil, and 115 MT of specialized nutritious food. The event today witnesses the arrival of 2000 MT of rice from China. The assistance will be used to support vulnerable Somali men, women and children with relief food, healthy school meals and specialized nutritious food for the prevention of malnutrition across the country. With this contribution will be able to reach over 136,000 of them for a period of six months. WFP is China’s friendly partner, I would like to take this opportunity to express the sincere appreciation to WFP for its efforts and friendly cooperation with China.

China is a responsible big country. Under the leadership of the Communist Party of China(CPC), China has solved the food security of nearly 1.4 billion population, and provided food aid to the international community within its capabilities and made tremendous contributions to human development. China has made great efforts to improve the human rights situation by developing its economy, for example, China Xinjiang has made continuous achievements in the cause of human rights. Individual Western countries slander and smear Xinjiang’s issue, disregard facts and have ulterior motives, with the aim of serving their political interests. Now Xinjiang is harmonious, happiness and vigorous development. In the past more then 20 months, no violent terrorist attacks have occurred and the number of criminal cases, including those endangering public security, has dropped significantly. Public security has notably improved with religious extremism effectively contained, while people are now feeling more secure. We have laid a good foundation for completely solving the deeply-rooted problems that affect the region’s long-term stability. Xinjiang has launched a vocational education and training program according to the law. Its purpose is to get rid of the environment and soil that breeds terrorism and religious extremism and stop violent terrorist activities from happening.

China firmly adheres the multilateral trading system and opposes trade protectionism and Unilateralism. It is under these principles that we actively carry out humanitarian assistance to the international community. But in order to implement “America First”, the US in fact has been practicing unilateralism, protectionism and bullyism, blatantly violated multilateral trading rules and wantonly wielded the big stick of tariffs, and imposed other countries into accepting its demands. Economic and trade friction provoked by the US damages the interests of both China and US and of the wider world. The tariff measures the US imposed harm others and are of no benefit to itself, Eventually lifting stones to smash their own feet. China will not compromise on major issues of principle. China does not want a trade war, but it is not afraid of one and it will fight one if necessary. China’s position on this has never changed.

China and Somalia enjoy a long friendship. Since the establishment of diplomatic relations between two countries, cooperation in various fields has yielded fruitful results. China firmly supports the peace and development of Somalia. Somalia is a country with great potential for development. Under the leadership of the Somali Government, significant progress has been made in peace and reconstruction in Somalia. China sincerely wishes that Somalia achieving lasting peace and stability. In the past, China helped Somalia build national stadium, theatre, hospitals and roads. In the future, China will continue to help Somalia develop its infrastructure, improve people’s livelihood and achieve revitalization.

China will strengthen cooperation with Somalia, consolidate and develop friendly relations between the two countries and achieve common development under the guidance of the Eight Major Initiatives and the Belt and Road Initiatives put forward by President Xi Jinping. We believe that Somalia will become better and better.

May China and Somalia enjoy friendly relations from generation to generation!