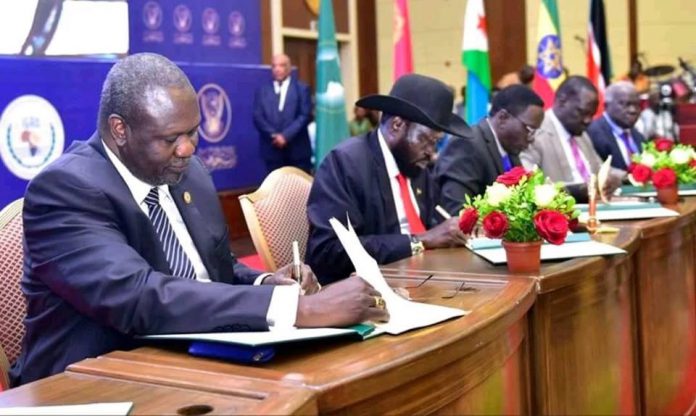 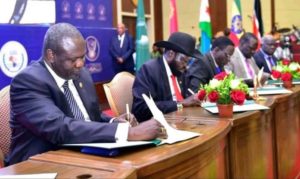 The parties signed the agreement in Addis Ababa during the 33th Extraordinary Summit of the IGAD Heads of state and government chaired by Prime Minster Abiy Ahmed.

Speaking at the signing ceremony, Chairman of IGAD, Ethiopia’s Prime Minster Abiy Ahmed appreciated the mediators and leaders in the region who exerted maximum efforts to seek a last solution for South Sudan.

He added the south Sudanese peace agreement has come at a right time while the entire East African region is celebrating magnificent achievement of peace and reconciliation.

“Our gathering here today is an opportunity we have to lay a ground work to the prosperous and harmonious region for generation to come. Once the positive development has been gained in our region, reconciliation process in South Sudan has realized ”, he said.

According to Abiy, IGAD has continued its track record of bringing tangible result at the South Sudan case.

“The eyes of the world are upon us as the South Sudan’s leaders signed a reconciliation agreement and lasting peace to their country which is indeed a great stride towards build a lasting peace,” Abiy said.

He further urged the South Sudanese leaders to implement the agreement without any delay “whatever your difference, you must not allow a single drop of blood to be spilled and life to be lost”.

He affirmed that IGAD will give the necessary support and work together with the parties for the full implementation of the accord.

Executive Secretary of IGAD,  Mahboub Maalim said the East African region has been witnessing a paradigm shift  and creating hope to be a stable region, mentioning the agreement.

The Executive Secretary said the peace agreement is “great achievement” for IGAD.

He also admired the leadership of Prime Minster Abiy Ahmed who has brought peace and stability to the region.