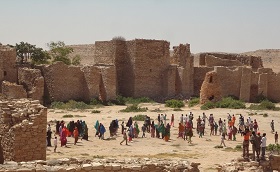 Thrilled and happy residents of Taleeh in particular and Haisimo region at large could not hide their emotions as they jubilantly thronged the streets of Taleeh , the regional headquarters, in celebrations following the complete reconciliation of brethren communities for lasting peace in the area who were hitherto immersed into bitter rivalry that spanned over six solid years.

The extraordinary efforts spearheaded and convened by the head of the Chieftaincy of the communities concerned, Chief Aqil Ismael Mohammed Ali Koore, the announcement of the end of the enmity and complete reconciliation of the brotherly communities was a great relief whose sigh lifted a burden of monumental weight off the shoulders of the residents.

A conciliatory meeting that took several days was convened by the Chief Aqil that brought together several chieftaincies, eminent elders and clergy of the concerned communities hence the committees indulge extensively and intensively on ways and means of trashing out the differences and bones of contentions.

This was the epitome of conciliatory efforts in stylish Somaliland Homemade Pacification Trademark to reconcile in its typical mode. Upon the close of the convention, the elders and their leaders swore by taking oaths of allegiance that bound them to uphold the peaceful, unity and solidarity accord to nurture a new page of harmonious setting.

They noted that the similar efforts of several emissaries who coaxed them have at least bore fruits.

The regional governor of Haisimo Abdirashid Mohamed Ahmed alias Hiir personally led the jubilant members of the public in a show of solidarity to celebrate the occasion by thronging the streets of Taleeh.

Members of the former enemy clans extended their hands in shakes and hugging sincerely for the new future.

The regional governor recalled the history of the fracases pointing out those six years has since elapsed in tense moments.

The residents showed the support for the resolve and at the same time prayer for rain for the drought hit area was observed.

On the other hand, to grace the occasion was the deputy head of the National Disaster Response and Food Reserve Agency Mr. Feisal Jama Hersi who revealed that the Head of State himself H.E. Musa Bihi Abdi, Interior Minister Hon. Mohammed Kahin and Water Resources Minister Hon. Suleiman Ali Kore were all closely monitoring the issue and its situation hence the state had exerted a lot of efforts by having pumped great inputs to facilitate thereof such results.

He appealed to the state and line NGOs, to swiftly eke in relief efforts to alleviate the suffering of the residents.